Facebook currently has more than 2.3 billion users, which is over half of the globally connected population (4.2b). That means that the majority of people who are willing and able to use Facebook currently are already doing so - so how does The Social Network continue to expand, and add more users, as it gets ever closer to reaching saturation point?

By connecting the almost 50% of the world that's not yet online, adding in new ways for users to not only access the internet, but to also become Facebook users in the process.

That's part of Facebook's broader plan, and its been rolling this out for years through its internet.org initiative and various other projects. And this week Facebook provided an update on its own, and general connectivity efforts, with its 'Inclusive Internet Index' report showing that, while such initiatives are progressing, they have lost some momentum over the past 12 months.

"The percentage of households connected to the Internet globally increased on average to 54.8% from 53.1%, a modest improvement of 3.1%. However, in low-income nations, Internet connections improved by a mere 0.8% on average. This stands in marked contrast to 2018, when this group saw 65.1% growth." 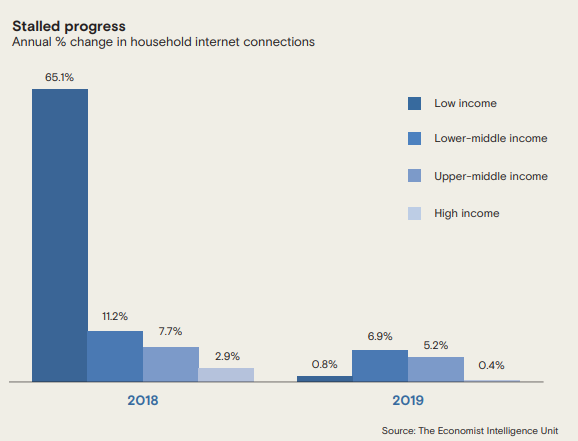 Despite the efforts of Facebook, and other tech organizations, to connect more regions, progress is losing momentum, due to a range of different factors.

For example, while mobile broadband subscriptions increased slightly this year, the cost of prepaid data plans increased in many regions, with providers looking to generate more ongoing revenue by signing users up to ongoing contracts. That's slowed momentum on overall connection - which, as you can see from the above chart, has had the most significant impact on new take-up in lower-income regions.

And that's a pressing problem, particularly when you consider this chart from another section of the report.

Given that so many people are now able to use the internet to better their job prospects - whether that's through finding open positions or using the available resources to upskill - the divide between those who have access and those who don't is widening, which becomes a more significant problem day by day.

Facebook, for its part, is exploring other connectivity options and ways to link more regions.

In addition to this, Facebook continues to explore advanced connection options, like its Terragraph project, which aims to bring high-speed connectivity to urban and suburban communities by utilizing 'mesh technology' installed in legacy infrastructure - so, for example, adding receiver nodes to existing lamp posts and on buildings.

Facebook had also been investigating the possibility of using solar-powered drone planes to connect more remote regions - called 'Aquila' - but it dumped the project last year. It is still seeking commercial partnerships with airlines to continue that project, but at present, the idea remains grounded, so to speak.

Given the insights into how connection can help users improve their prospects, there's more to Facebook's push to increase connectivity than merely increasing its own usage stats. That's part of it, of course - as with all of Facebook's initiatives, there's a business consideration along with an altruistic one - but the report does show that such efforts can have significant, lasting impacts on remote communities, and that failing to connect them will only exacerbate division between the 'haves' and 'have nots' of the world.

Also, another interesting element of the report - despite rising concerns about data misuse and online privacy, the majority of people have not changed the way they use the internet.

"More than half (52.2%) of survey respondents say they are not confident about their online privacy, which is basically steady since the 2018 poll. Trust in government websites and apps has declined in the West, retreating by 10 percentage points and 6 percentage points in North America and Europe, respectively. Although a majority of respondents say fears about data theft are making them choosier about where they shop online, 59% of respondents agree that making purchases online is safe and secure, a figure that has held relatively steady compared with last year’s survey."

It's interesting to note the user response to such issues, which, you would expect, would be another rising concern in ongoing adoption. The benefits of connectivity would outweigh the potential negatives either way, but it is worthy of note that, despite overall trust levels decreasing, internet behaviors remain largely unchanged.

It's worth keeping tabs on Facebook's ongoing efforts on this front, and how the platform is seeking to connect the world, with a view to facilitating a 'borderless' society, where users can connect with anyone, anywhere, at any time, and brands can maximize their opportunities by reaching entirely new markets.

The data highlights the clear benefits to such access, but as noted, there is also the business side from Facebook, the greater opportunities signing up even more users will bring.

Given this, it's not impossible to consider that Facebook might keep adding millions more users yet, and keep expanding its already huge empire - despite rising privacy and political concerns.