Amidst ongoing investigation over how its platform was used to spread misinformation during the 2016 US Presidential Election, Facebook has reported its third quarter earnings, posting solid increases in both audience and revenue.

First up, on users - Facebook now has 2.07 billion monthly actives, a 3.19% increase on last quarter’s results. 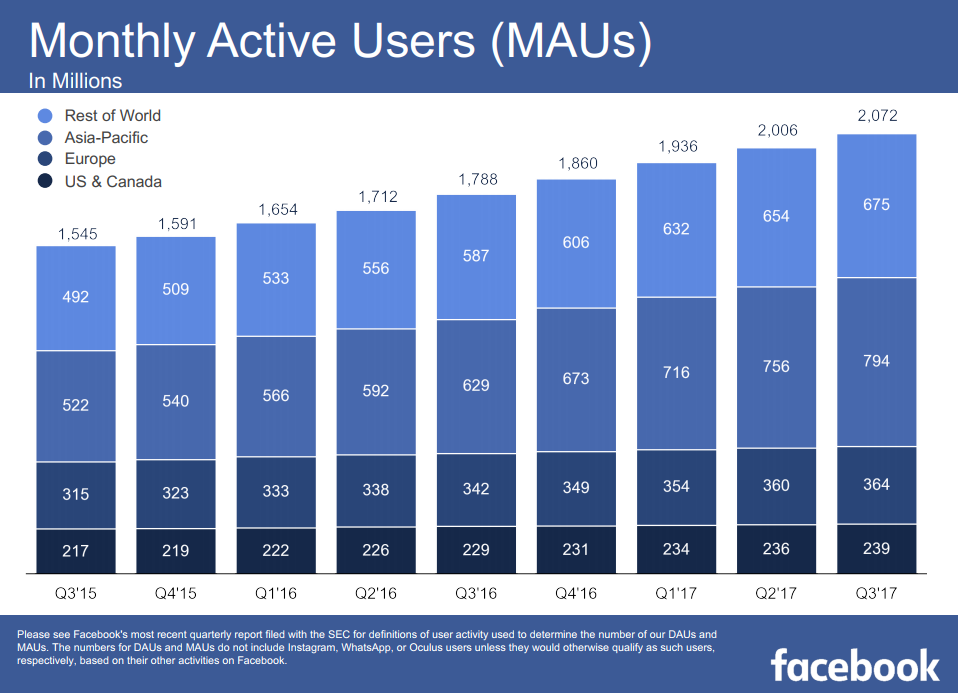 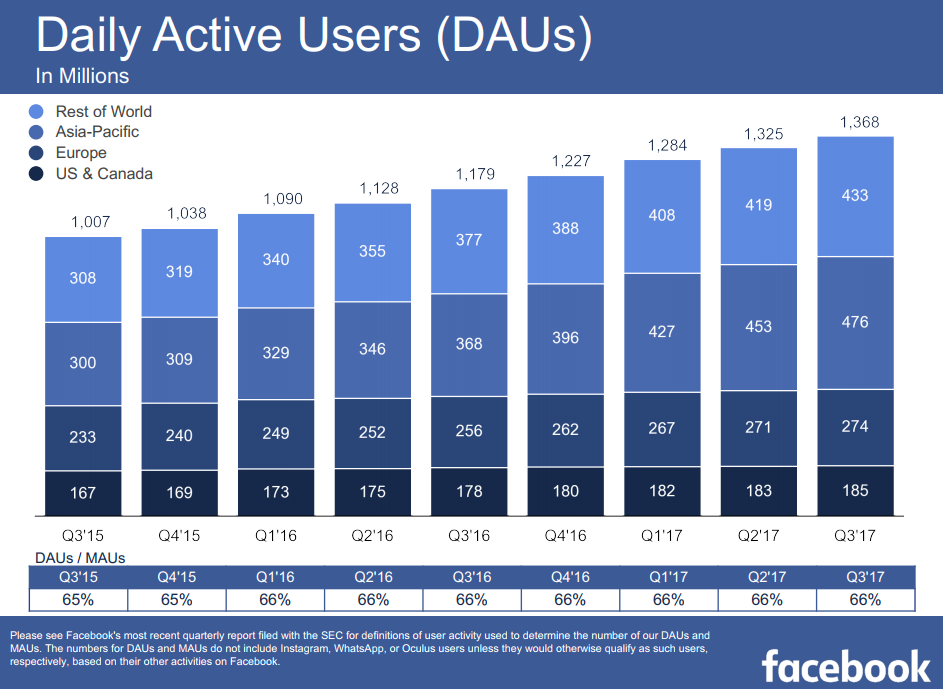 Despite the increased concerns about how Facebook data has been used to target certain users, that sentiment hasn’t impacted audience growth. For comparison, Twitter has boosted its MAU count by just 4% in the last 12 months (yes, that comparison is probably a little unfair, but it does provide some backdrop to just how significant Facebook’s continued growth has been). 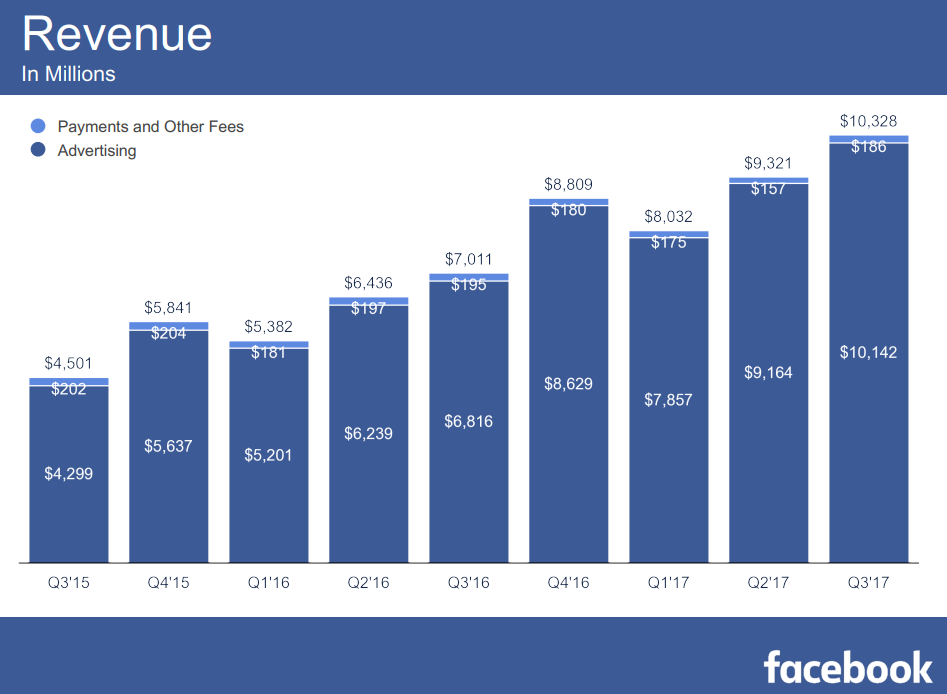 That said, revenue growth is at 47% year-over-year, compared to 59% in Q3 2016. Facebook has previously warned about slowing growth due to them reaching the limit of ad content they can show in the News Feed.

Looking at Facebook’s global growth, the company has seen the most significant increase in revenue in Europe, which has grown by almost 55% year-over-year. 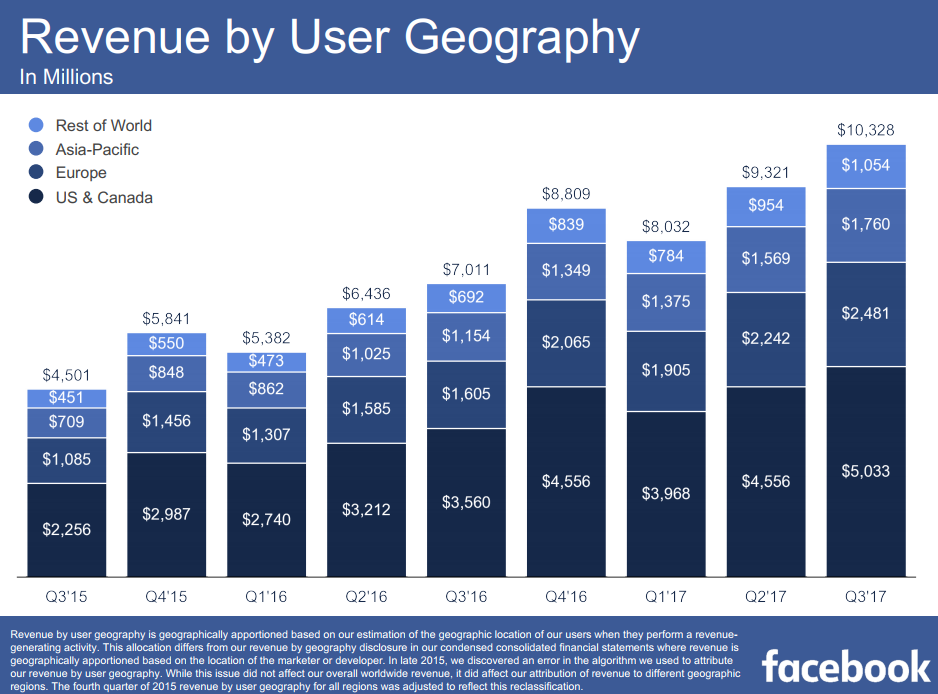 The growth in regions outside of its core market underlines Facebook’s continued strength – where other platforms have failed to fully cater to more regions, Facebook is succeeding in maximizing their regional revenue opportunities.

Facebook’s also improving its revenue per user stats, recording increases in all regions for the quarter, with the most significant growth in the US and Canada. 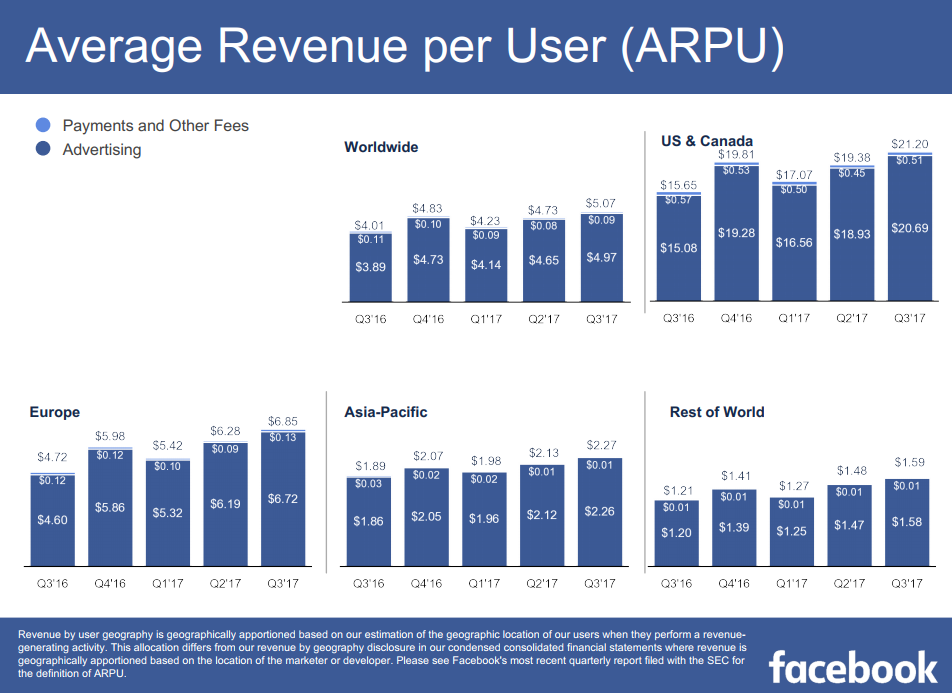 It’s another impressive report car from The Social Network. While the platform is set to come under more scrutiny as part of the House Intelligence Committee hearing, the numbers underline the company’s ongoing expansion, with no signs of slowing as yet.

If anything, Facebook looks set to be on track for even more market dominance, especially as it continues to acquire rising social apps in order to maintain its hold on audience attention.

In response to the elections ads investigation, Facebook’s already announced a range of new measures, including new transparency tools for political ads, showing how they’ve been both funded and targeted.

The big question now is whether The Social Network might come under more scrutiny from regulators as a result, which could have significant implications for all Facebook advertisers.

In addition to this, Facebook’s also continued to put more focus on developing Groups in the last quarter, while they’ve also added new options to Marketplace, which could see it too become a significant revenue stream in future.

But a bigger concern more marketers of late has been Facebook’s tests of a new News Feed option which would see direct Page posts removed from the main News Feed entirely. Facebook’s moved to reassure businesses that they don’t plan to roll this new format out anytime soon, but it is being tested in six regions, and Facebook will assess the results before deciding on any possible future action.

That change would be significant for marketers, and while there’s still a long way to go before we see anything significant come of it, and there are various ways in which it could work, it’s also likely to be a key concern for businesses moving forward.

But more interesting in that development is the underlying reason for such a test – why does Facebook feel the need to try out such a major potential shift? This likely suggests that Facebook is still seeing declines in personal sharing (i.e. the sharing of personal updates and photos from users), which could also become a major concern, if left unchecked. People are using social media more and more, people are sharing more about themselves – so if they’re not doing so on Facebook, where are they going? That seems to be what Facebook’s still seeking to address.

On the accompanying earnings call, Facebook CEO Mark Zuckerberg noted that they will be investing significantly more into security in response to the election interference investigation – so much so that it may impact profitability in the short term.

Zuckerberg also noted that their most successful Snapchat clone, Instagram Stories, is now up to 300 million daily users. The option reached 250 million daily actives in June.

These two announcements pretty much sum up the state of play at Menlo Park – a great challenge, possibly the platform’s greatest challenge, in tackling potential misuse, but significant growth in usage, as Zuckerberg’s empire continues to expand.

As does the social responsibility that comes along with it.