Social media has come under intense scrutiny in recent years in relation to the way in which social platforms can be used, and misused, to spread misinformation and influence opinion, in large, and impactful, numbers.

The most prominent case in western nations was the 2016 US Presidential Election, which, as confirmed by the recent Mueller Report, saw Russian-based operatives using social media platforms to sway voter opinion. The actual impact of those actions is unclear, but what has become abundantly evident is that social platforms can, and do, play a part in changing opinions. And that can have a range of negative impacts.

Indeed, a recent study in Germany found that higher rates of Facebook usage correlated with increased attacks on refugees, YouTube has been pegged as a key platform for flat-earth 'truthers' and other anti-science shifts, while Facebook itself has implemented steps to take action against anti-vax posts, another movement which has gathered increased momentum via social networks.

Given that the majority of people now get at least some of their news input from social media, and social media has become so prominent within our broader interactive landscape, the links are very clear. Add to that the sorting algorithms which show you more of what you want to see (i.e. agree with), and less of what you don't, and the potential scope of the problem raises alarm. And now, amid those rising concerns, governments themselves are taking action.

This week, Sri Lanka took the extraordinary step of banning social media outright in the wake of a series of terror attacks which killed hundreds of people across the nation. Fearing the spread of misinformation, and anger, online, Sri Lanka opted to cut off access to Facebook, WhatsApp, YouTube, Instagram, Snapchat and Viber to all citizens.

Of course, it's not the first time that a nation has blocked social media, or even a first for Sri Lanka itself, but the way in which this ban was carried out does highlight the heightened concern about such impacts.

As reported by The New York Times:

"Sri Lanka’s decision to block social media on Sunday was unusual because the government shut down access before any social-media-inspired violence was known to have taken place. The move suggests not just officials’ worries about social media’s risk to public safety at moments of national tension, but also their distrust in the companies’ ability to manage the platforms responsible."

The Sri Lankan Government has called on Facebook previously to better police its platform, and remove potentially dangerous content quickly. According to NYT, only last year, the government moved to block social networks "after viral rumors and calls to violence, circulating largely on Facebook, appeared to provoke a wave of anti-Muslim riots and lynchings". After implementing a brief block, Facebook agreed to put on more staff to cater to such needs.

The fact that Sri Lanka has cut off Facebook so quickly this time shows that the government doesn't have faith in Facebook's systems - not that Facebook, or anyone, could necessarily halt the spread of such content entirely when dealing with user posts, in real-time, at such a huge scale.

But that is what more governments are calling for. In Australia, the Federal Government recently approved new legislation which would implement significant fines, and even jail time for social platform executives, if they fail to “remove abhorrent violent material expeditiously”. In the UK, the government has released an 'Online Harms' white paper, which outlines a proposed new approach to social network accountability, and takes a similar stance to Australia's regulations. The actual implementation of such is complex, particularly as it relates to the definition of 'expeditiously' in this context, but the fact that governments are even taking these steps shows that they are taking social media distribution more seriously, and are weighing its potential impacts.

Could that see more bans, more nations cutting off Facebook entirely? It's impossible to say, but there is a growing precedent. And leaders are casting a more watchful eye on proceedings.

As noted, Sri Lanka's not the first nation to cut off access to social apps entirely. There is, of course, 'The Great Firewall' of China, where the Chinese Government implements strict controls over what apps are accessible within its borders.

Various other nations have also instituted social media bans at different times, for differing reasons, with several never allowing those apps back in. 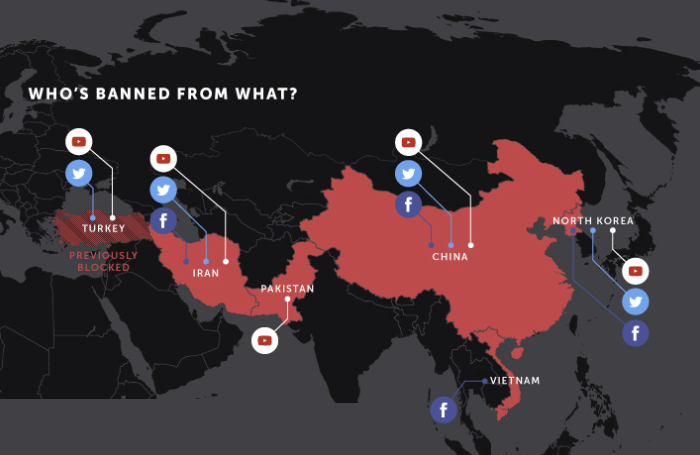 Just recently, India implemented a new ban on rising social app TikTok due to concerns about the sharing of concerning content. That, in itself, is not a huge surprise, but again, India jumped straight to a ban, as opposed to warning parent company ByteDance or implementing regulations. The concerns about social media disruption are prompting this type of hastened response, which, as noted, is not a good sign for the further expansion of such tools into new regions.

For its part, Facebook has implemented new News Feed ranking signals, a new crackdown on content shared in private groups, it's rolling out updated terms and conditions in line with requirements stemming from a European court trial and it's looking to provide digital literacy training to journalists to help them beat out misinformation. It'll take some time to know whether those measures will be enough, but on the face of it, at least at this stage, they're not. In recent days, in the midst of the Australian election campaign, officials have called on Facebook to better police the sharing of misleading content, which is once again gaining traction on the platform.

Can Facebook and the other social platforms do more on this front? Is that even possible, given the nature of social media and how such material is shared? Facebook CEO Mark Zuckerberg has already pre-empted calls for regulation - by calling for it himself - but even then, how that would work, and what it would entail, is unclear.

It's a key area to watch in the social media space, one which could have significant implications moving forward.