Sports has always been a key element of our interactive process, a means to connect and engage over a common interest and participate in related events. Given this, it's no surprise to see that sport also plays a significant role in how people engage on social platforms, and that can be a valuable consideration for brands looking for ways to increase brand awareness and connection with their fans.

In line with this, and in the lead-up to the 2019 Super Bowl, Facebook has published a new report which looks at how social media has changed the way people engage with sports content, and what brands need to consider in this shift. Facebook utilized the GlobalWebIndex “Sports Around the World” study, which surveyed over 90,000 internet users, in order to extract relevant insights about how digital consumers engage with sports.

And while not every brand should be jumping aboard the Super Bowl train (note: the actual benefits of viral tie-ins like Oreo's 'Dunk in the Dark' tweet are not as clear-cut as you might think), there are some interesting considerations in Facebook's research which could help you better plan your future sports event engagement.

First off, according to the data, the gender divide among sports fans may not be as significant as you'd expect.

"Viewing figures show that women are avid sports watchers as well. Globally, nearly 80% of women surveyed say they watch live sports online or in person, not far behind 90% of men who said the same."

This varies by region, with sports fans in Latin America being the most gender-balanced.

This is an important consideration - many brands who market exclusively to women, for example, may not have considered the opportunities of effective sports tie-ins. It won't be relevant for all businesses, but the data shows that there are potential opportunities, and that sports fandom is not as dominated by men as some might expect.

And another worthy point - Facebook also notes the rising interest in female sports leagues, and the opportunities for additional coverage of such on social platforms.

"Despite the growing popularity of professional women's sporting events, these events are not easily available on broadcast TV in most areas. Sports fans are therefore looking for these events on alternative platforms, such as social media, where more sports leagues are available."

In terms of specific sports, Facebook has also provided a listing of the most popular sports leagues in each region (note: due to licensing concerns, Facebook does not specifically name the Olympics, the NFL, NBA etc.). 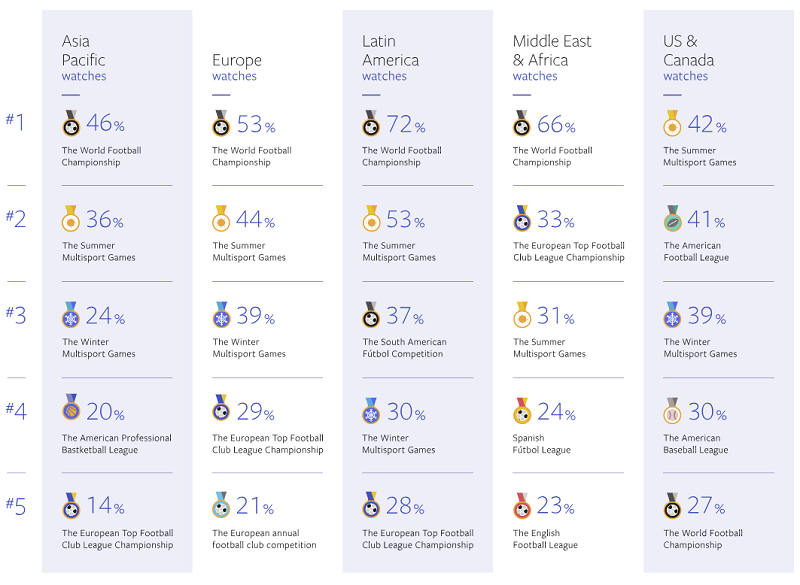 There are some surprises there, and the listing may help businesses get a better understanding of the sporting events likely to be of the most interest to their target demographics, in order to better target their related tie-ins.

And finally, Facebook also notes the rise in second-screening as viewers look to engage in real-time on social around sports events. 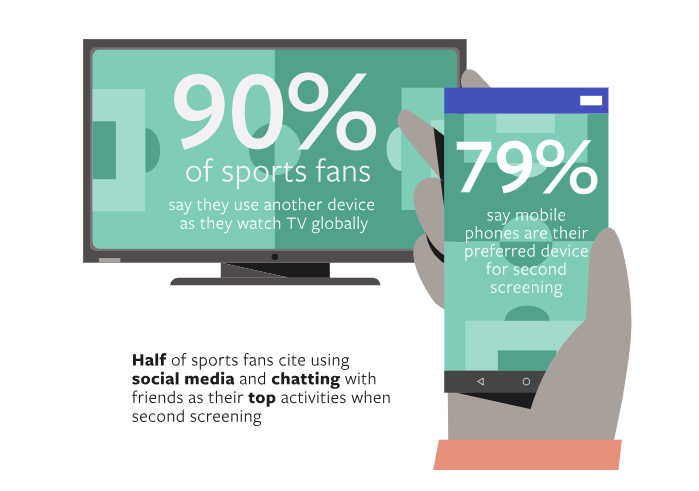 This is a key trend that both Facebook and Twitter have been working to tap into - a growing number of people now engage online while they're watching TV content, including sports, which, theoretically, should provide both platforms with an opportunity to include relevant tie-ins to capitalize on such behavior. If they can get it right, that could enable them to tap into TV ad dollars by further engaging their audiences - if, for example, Twitter could both broadcast a major event and host the related discussion, that's a potentially huge captive audience.

Thus far, their experiments on this front haven't worked out as they would have hoped - but even so, the data highlights opportunities for themed brand content and connected ad efforts.

"During the 2018 games in South Korea, 82% of Instagram Stories posted in Japan capturing "play-by-play" moments of the events also included shots of TV screens, making mobile and TV a good marketing pair."

Not every business will be able to run TV ads along with connected social media campaigns, but even so, the insights show that there are ways that brands can reach audiences during major events by tapping into real-time on-platform discussion.

There are some interesting considerations here, and even if you don't feel like your brand has an immediate connection to sport, or that sports fans are not in your target market, the data shows that they likely are, which could make sports events worthy of consideration. The Super Bowl is coming up fast, and it may be too late to plan a tie-in this year, but there are a range of other opportunities you could consider - and it may well be worth the effort.