As Facebook continues to emphasize group usage, The Social Network is also looking to clarify what its group privacy settings actually mean, in order to simplify the process and ensure that users understand their group activity exposure. 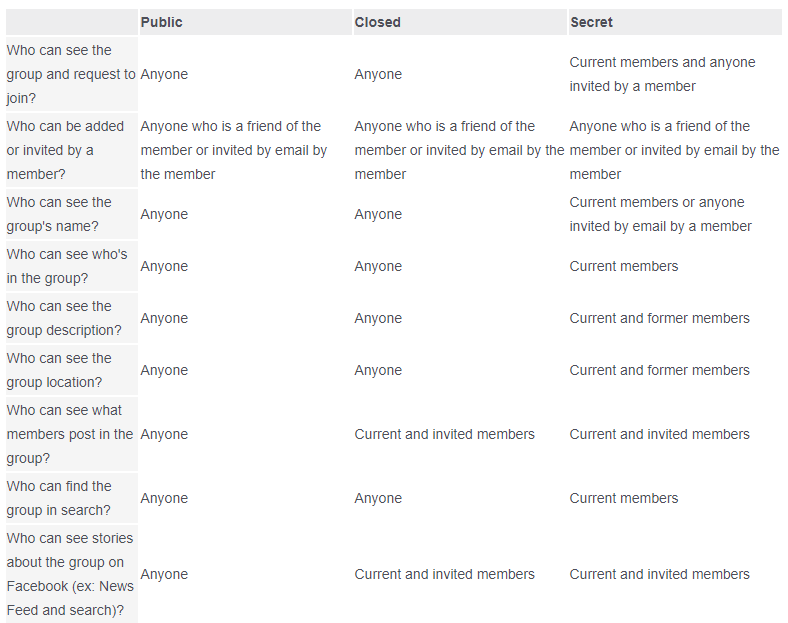 As you can see from this chart, it can be a little complicated to understand exactly what is and isn't viewable within each. As such, Facebook will now reduce the available group privacy options to two - 'Public' and 'Private'.

"We’re making this change because we’ve heard from people that they want more clarity about the privacy settings for their groups. Having two privacy settings - public and private - will help make it clearer about who can find the group and see the members and posts that are part of it. We’ve also heard that most people prefer to use the terms “public” and “private” to describe the privacy settings of groups they belong to."

Facebook says that it's worked with "global privacy experts and advocates" in order to ensure that these new privacy settings are both easier to understand and apply in practice.

"With two clear options, this new privacy model is much more intuitive. Public groups allow anyone to see who’s in the group and everything that’s shared there. With private groups, only members can see who else is in the group and what they’ve posted." 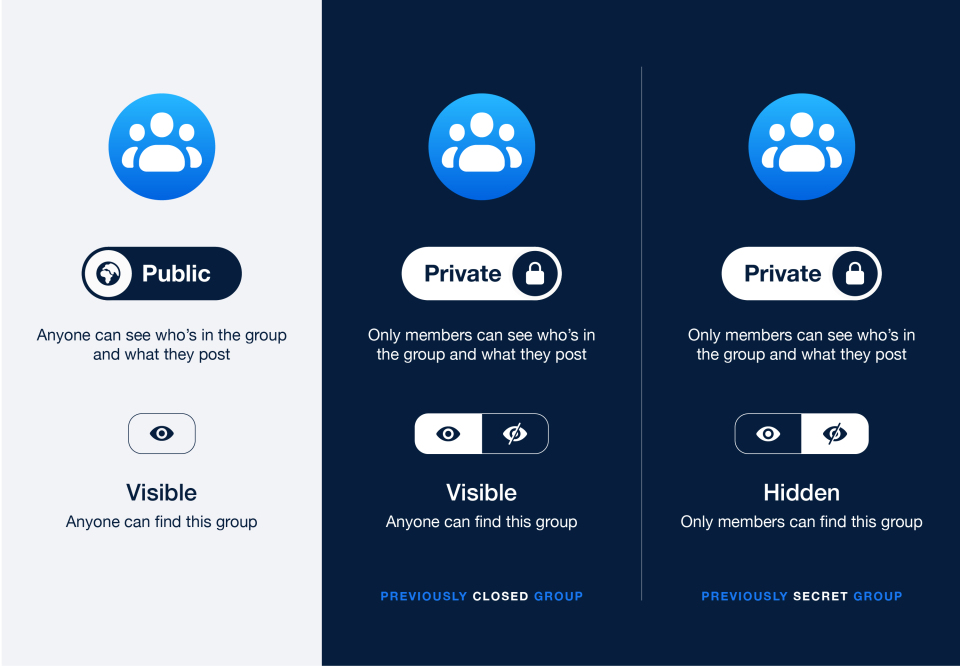 So, as you can see, there are, essentially, still three options available, but the language has been clarified, and the available options streamlined to make each element a little clearer.

The changes will be applied to existing Facebook groups as follows:

A big part of this clarification relates to what people are discussing within Facebook groups, and ensuring that members feel safe to share their experiences within Facebook communities.

As Facebook has previously noted, millions of its users are part of what it says are "very meaningful" groups - groups that, upon joining, quickly become key to their social networking experience, and play important roles in their support structures. That often means that people are discussing highly sensitive matters and concerns, and given this, it's key that Facebook ensures users feel confident and comfortable in doing so, without risk of unwanted exposure.

Facebook has outlined its additional user safety efforts in this regard in a separate update - while on security and safety more broadly Facebook also notes that:

"Our Community Standards and proactive detection technology will continue to apply across private and public groups, just as they did for the previous privacy settings of public, closed and secret groups. This allows us to find and remove bad actors and bad content, helping keep Facebook safe for everyone."

That directly addresses the concern that more private sharing on the platform merely hides some of the divisive, disturbing elements from public view. Facebook says that, even in private groups, these elements are under the same guidelines, and will be detected in the same way.

Facebook groups are used by more than a billion people each month, and as social sharing shifts into more private spaces, it's important that Facebook looks to facilitate such trends and cater to user needs in this respect. As such, simplifying its group privacy settings makes sense - though given its more recent record on user privacy and data exposure, it'll be interesting to see whether the new settings make users feel more comfortable in sharing their more intimate information on the platform.

You can read more about Facebook's group privacy updates here.