This could be a handy one for Facebook Stories creators.

As highlighted by user Mamun Billah, Facebook is now testing a new 'Green screen' option within the Facebook Stories creative tools, which will enable users to overlay their video over a selected video or still image. 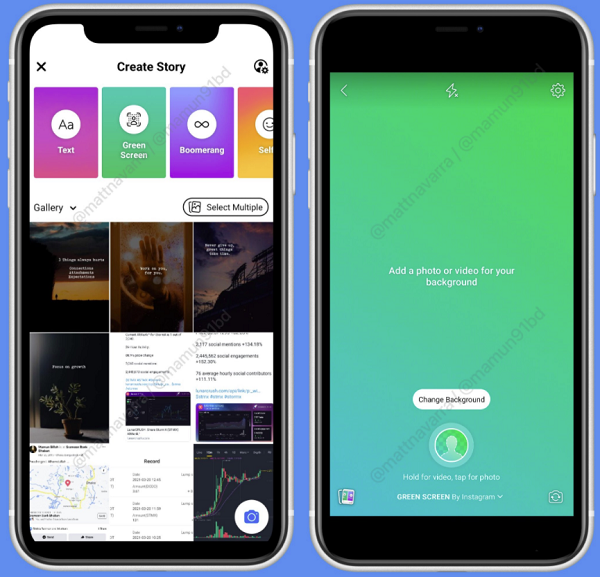 As you can see in this example, shared by social media expert Matt Navarra, the new Green Screen option would be available within your Stories creation tools. Once selected, users will be able to add a photo or video from their Camera Roll, which will then be added as the background. Users will then be able to film themselves or post a still image that would be overlaid over that background visual.

As you may note, down the bottom of the second screen, the option actually comes from Instagram, where the Green Screen tool is already available. TikTok also provides similar, where it's proven particularly popular, while Twitter recently started to experiment with its own background tools for Fleets.

Given this, it's not entirely original, or even novel in such usage, but it will add another element to Facebook Stories, which could provide the option to a range of people who've not used the same on other platforms.

That could also open up new creative considerations for brands looking to add Facebook Stories into their content mix. Facebook Stories still doesn't seem like a major consideration, but its top of feed placement makes it a potentially valuable branding tool for those that can get it right.

New options like this only enhance that opportunity, and it's worth considering the potential of such as they're rolled out more broadly in the app.

There's no word on a full roll-out of the option, but some users have access to the Green Screen option in Facebook Stories right now.