As part of the platform’s ongoing effort to maximize video ad spend, Facebook has announced some changes to its video metrics which aim to better align with evolving video consumption behaviors.

First off, Facebook's updating the way it measures 3-second and 10-second video views by discounting those views that may come as an accumulation of re-watched time.

“When people watch video ads on Facebook, they’re able to rewind the video just as they can with video posts from friends and family in News Feed. This is a different experience from most pre or mid-roll ads on other platforms, where people are not able to pause or rewatch parts of a video ad. We offer metrics such as 3-Second Video Views and 10-Second Video Views, and these metrics previously included the seconds people might rewind or rewatch a video when they see it in News Feed.”

Given that this can skew the data (i.e. a person watching the first three seconds several times would then count as a 10-second view), Facebook will now only count unrepeated seconds watched.

It’s a minor change, but it can be significant – having a lot of 10-second views would suggest you’re on the right track, but if there’s something eye-catching in that first couple of seconds which a heap of users are re-watching, they may not even be seeing your full message as intended. Providing a more accurate measure of what your audience is seeing will enable brands to better plan their ad sequences in line.

“Last year, we shared how videos may not always play when an impression is reported due to someone’s settings, network or behavior. For example, if a person has autoplay turned off, their phone has low battery or they're in an area of low connectivity, videos -including video ads - would not autoplay.”

Facebook notes that News Feed videos do play 70% of the time, so the vast majority of users who are seeing your video ads are also seeing them play, but there are occasions where this is not the case. It can be helpful to know how many people within your audience are affected by this as you go about your planning.

The Video Plays metric will provide that transparency, and will be particularly helpful for advertisers looking to reach people in low connectivity regions or reach audiences with restrictive data plans, which could impact their experience.

And the last change Facebook has announced is the removal of 30-Second Video Views and Video Percentage Watched, because, as Facebook says:

"...they are redundant with other metrics we offer and are used infrequently”

The most significant change here is the switch to ‘Milestone Metrics’ exclusively – rather than telling you what specific percentage of your video each user has viewed, Milestone Metrics cluster viewers based key points in your content. This simplified reporting can help you better understand the impact of your efforts. 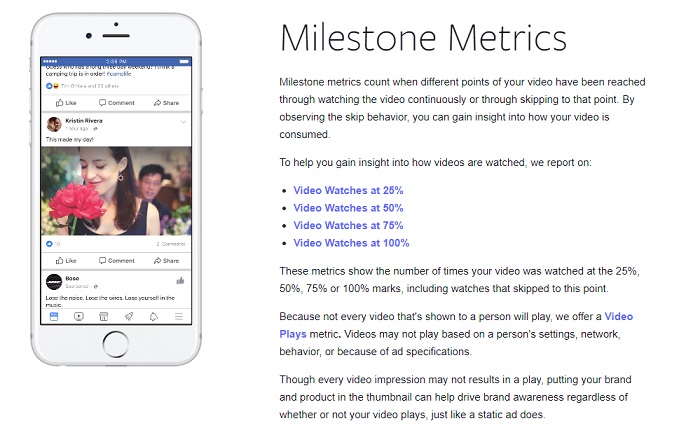 The changes, as noted, are intended to provide more transparency in your Facebook video metrics, and for the most part, they seem to make fairly logical sense. If you're looking for more info on the changes, Facebook provides a full overview of their video metrics here which will help to clarify the key elements.