This could have a significant impact on Facebook marketers operating in Europe - Facebook has this week shared an update on its developer blog which outlines various restrictions on Messenger API usage as a result of its efforts to comply with Europe's evolving data privacy laws.

And some business users are already seeing warnings - this notification was shared by @OnAirWithRick on Twitter: 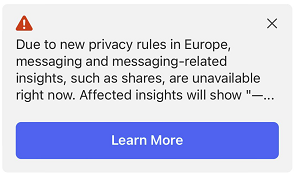 >What's worthy of note here is that this was sent to a US-based organization, which means the impacts could extend well beyond EU brands using the Messenger API.

So there are some wide-reaching implications, which will impact virtually any brand that uses the Messenger API and has followers or connections within Europe.

The changes appear to be connected to the EU General Data Protection Regulation (GDPR), which came into effect in 2018, but has been gradually evolving to cover more aspects of consumer data usage over time. Why December 16th is important is unclear, but Facebook says that this is the date when the restrictions will come into effect.