Over the last few years, Facebook has been heavily criticized for its impact on news distribution, and its subsequent influence on political and societal shifts. Now, we're about to get a case study in whether those criticisms are actually justified, with The Social Network set to block all news content in Australia due to disagreement over the Australian Government's proposed new media bargaining laws.

"In response to Australia’s proposed new Media Bargaining law, Facebook will restrict publishers and people in Australia from sharing or viewing Australian and international news content."

Facebook appears to be rolling the new blockage gradually, with all the Facebook Pages of the major news outlets now featuring a black cover image, with the 'Posts' tab removed. 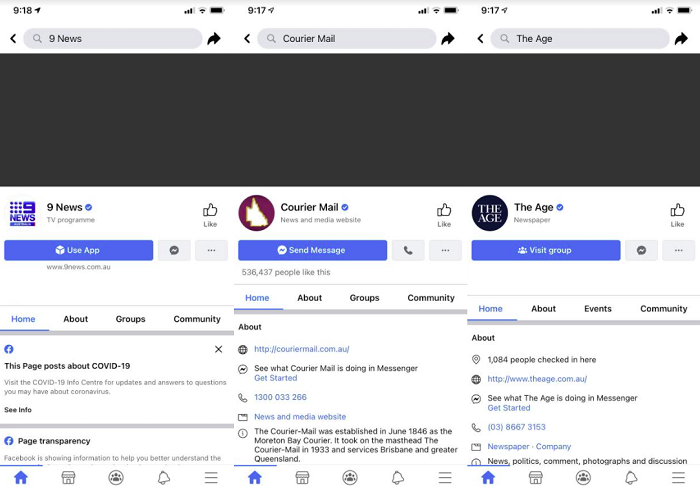 When you go to share a post, users are seeing different types of errors - some with basic notes, others with explainers.

Facebook has also cancelled media interviews in Australia, while various reports have also indicated that Pages of Government departments have also been caught up in the blockade.

This is a major stance for Facebook to take. Earlier this week, Google announced new deals with two of Australia's biggest news publishers - Seven West Media and Nine - which will see the search giant pay these publishers around $30 million each for use of their content within Google's news products. Those deals will ensure that Google can continue to operate under the new media bargaining provisions, but without such agreements, Google too was threatening to pull out of the Australian market entirely.

The Google deals have been welcomed by the Australian Government, but Facebook, the only other company specified in the reforms, has opted not to adhere to the new rules.

"The [Australian Government's] proposed law fundamentally misunderstands the relationship between our platform and publishers who use it to share news content. It has left us facing a stark choice: attempt to comply with a law that ignores the realities of this relationship, or stop allowing news content on our services in Australia. With a heavy heart, we are choosing the latter."

The proposed media bargaining law sought to force Google and Facebook, specifically, to share a portion of their respective revenues with local news publishers via a mandatory code of agreement.

The law was formulated on the back of the Australian Competition and Consumer Commission's "Digital Platforms Inquiry" report, published in 2019, which underlined the sheer dominance of Google and Facebook in the local digital market. 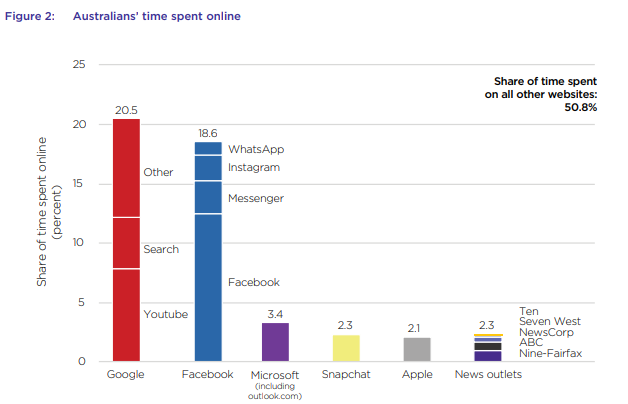 Given that Google and Facebook take up around 80% of the Australian digital advertising market, and considering the compounding impacts on the local media sector as a result of COVID-19, the government has sought to push forward with these new arrangements, essentially forcing Google and Facebook to pay for links to Australian news sites.

Which makes little sense. As both Google and Facebook have noted, if anything, they actually drive direct value for Australian news publishers by providing means to distribute their links.

"In fact, and as we have made clear to the Australian government for many months, the value exchange between Facebook and publishers runs in favor of the publishers - which is the reverse of what the legislation would require the arbitrator to assume. Last year Facebook generated approximately 5.1 billion free referrals to Australian publishers worth an estimated AU$407 million."

Still, the Government is pushing ahead, which will now see Facebook block distribution of all news content among Australian users, which it will do via a combination of technological and human review.

"For Australian publishers this means:

For international publishers this means:

For our Australian community this means:

For our international community this means:

As noted, this, inadvertently, provides an interesting case study for Facebook's move towards reducing the amount of political content on its platform. If Facebook does indeed end up maintaining this blockade for some time, it will give us new insight into how Facebook might be if news content was not available in the big blue app, and what impacts that has on subsequent discourse and distribution of media reportage.​

Will content family and friends now dominate feeds? Will light-hearted, inspirational posts get more time in the sun? Will misinformation gain more traction than ever before?

And most importantly, will that make users come back to Facebook more often, or less?

Figures show that a growing number of people now rely on Facebook for news updates, and groups and discussions are often dominated by the latest news stories. If Australians can't discuss such on Facebook, will they go to other platforms instead?

For Facebook's part, it says that news content only makes up around 4% of what people see in their Facebook feeds. So the impacts, from Facebook's perspective, will likely be minimal - but will it hurt overall information flow, and publisher revenues as a result?

There are many questions that this test can provide insight into, and while it still feels like a compromise can, and will be met at some stage (Australian Treasurer Josh Frydenberg released a statement shortly after Facebook's announcement noting that negotiations were still ongoing), it'd be interesting to see the news ban kept in place, at least for a time, in order to get some understanding as to the impacts of news engagement on the platform.

It could also open up new opportunities for businesses on Facebook, with their reach likely set to see a jump as a result of lessened competition in feed.

As noted, the changes are being implemented gradually, with more Pages and providers seemingly being limited by the hour.