After testing it out for the last few months, Facebook is now rolling out its new 'Dark Mode' for Messenger - but they've hidden the function, Easter egg style, behind an in-app emoji trick.

Here's how you can activate the new function - and a disclaimer, this may not be available to all users as yet (I tried it on two devices, on one, it worked, on the other it didn't).

First, ensure the Messenger app on your device is updated to the latest version.

Next, go into any chat and head into that specific conversation's settings by tapping on the name of the person, or people, in the discussion at the top of your Messenger window.

Within the chat settings, change the chat emoji to the moon image. Now, head back into the chat and send the same moon emoji as a message. 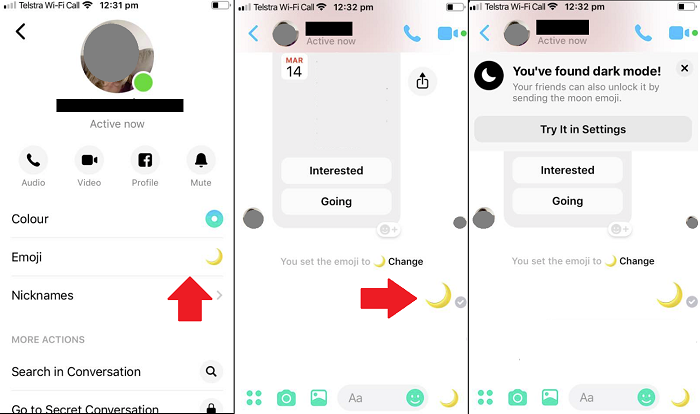 For some users, this is enough to activate Dark Mode (you can see the prompt in the third screenshot above noting that 'You've found dark mode'), but for others, you may have to actually double-tap the moon emoji within the chat. I had to tap on the moon emoji a few times - eventually, it sparked a flood of moons falling down the screen, then the dark mode prompt appeared.

Once you've 'found' dark mode, you can tap on the prompt to head to settings and activate it. 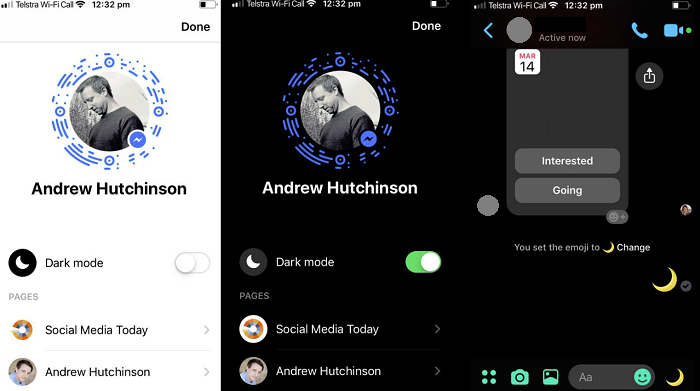 As noted, this may or may not be active for all users at this stage - some are saying it's not active for them, and as noted, I tried it on a couple of devices with differing results.

Either way, it likely does mean that Facebook will roll out dark mode to all users soon, not just those who know this trick. Facebook first previewed Messenger dark mode as part of its broader app revamp announcement last May, while code hacker Jane Manchun Wong shared screenshots of the option in development back in October.

If you have trouble trying out this process, hold tight - it'll no doubt get a bigger, simpler release very shortly.

UPDATE (3/4): Facebook has now officially confirmed the new 'dark mode' process, and has noted that the functionality will be "fully rolled out in settings in the coming weeks".