Facebook’s adding a new update option, with users to be given the opportunity to post colourful lists of their choosing as a means to boost engagement and interaction on-site. 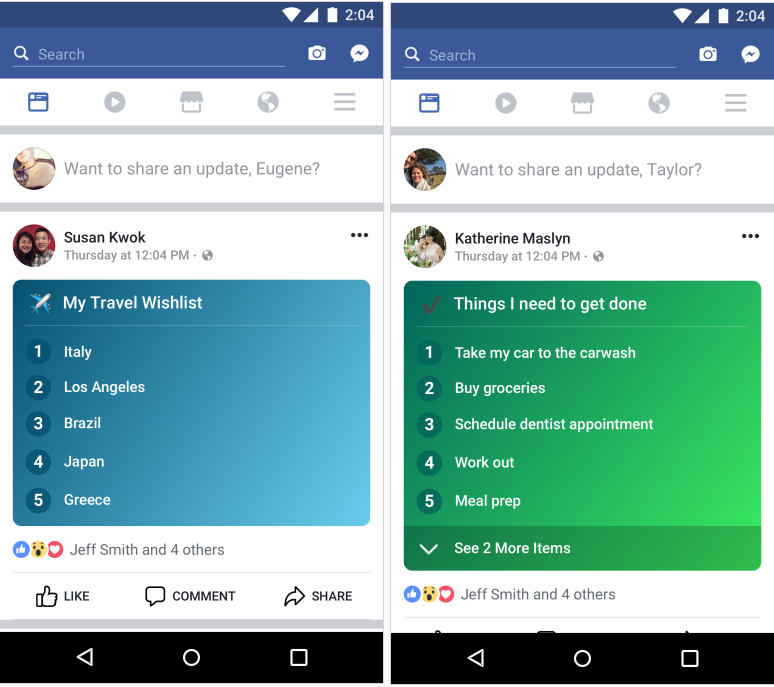 The list option, originally spotted in testing some weeks back, is fairly straight-forward – when composing your status update, you’ll be able to select ‘Lists’ from the various options available (Polls, Check-In, Ask for Recommendations, etc.). Once selected, you’ll be given a new template to put together your list – you can add in your various responses (it’s unclear, at this stage, if there’s a limit on the number of items you can add), change the background color, add emoji – whatever suits your mood. 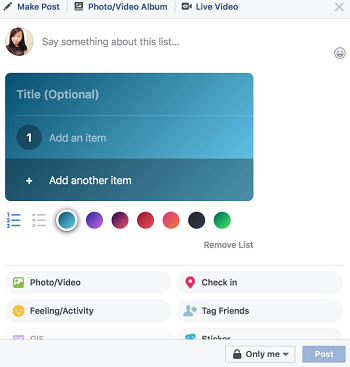 As noted, the main motivation for the addition, according to Facebook, is to provide an easier way for users to put together lists, since it’s something they’re already doing anyway.

Actually we built lists because we saw lots of people creating lists as long statuses and with pictures, and thought it would be good to make it easier for people to create lists first class. I hope we can get to a point, someday, where you don't always assume ill intent.

Indeed, that is the common reaction to Facebook’s updates – the platform’s various algorithm shifts have left many questioning Zuck and Co.’s ulterior motives. Facebook is, after all, a business at the end of the day.

But in order to remain the leader in social, with more, evolving options becoming available all the time, Facebook needs to build tools which boost appeal with its audience – and keep people coming back for more.

Will lists do that? It’s hard to say, but you can imagine that they could help boost engagement, and as Facebook revises its algorithm to boost the reach of posts that inspire person-to-person interaction, Lists seem like a prime candidate for prompting discussion, and one which will get more reach.

But it’ll also be interesting to see if the tool can be used for business purpose - for example, brands could search for publicly posted lists for business insights. If there were a list, for instance, which compared the top shoe brands, and that triggered a lot of discussion in the comments, that could be gold for advertisers looking to glean relevant insights. This may be even more valuable for local businesses – if someone were to start a list of best local cafes, the surrounding conversation could be hugely valuable for SMBs trying to understand how to boost their appeal.

This, of course, would depend on whether the list was posted publicly or not, and it’s not the intention of Lists as such (as per Mosseri), but there could be brand value.

Brands could also utilize lists in their influencer marketing strategies, calling on advocates to create relevant listings, with their brand on top, in order to spark related discussion.

As a pure engagement tool, Lists don’t appear to add a heap to the Facebook process – though again, as noted by Mosseri, Facebook has the data on this. If their insights show that lists are popular, and help drive engagement, then the addition makes perfect sense. Given this, it’s impossible to make any sort of assessment on the viability of the option – maybe you’ll see a heap of them floating through your Feed in future, maybe you’ll see none.

Either way, it’s another consideration to keep in mind.

The new List option is being rolled out slowly – if you don’t have it yet, you likely will soon.