Facebook is developing a new app designed to help former prisoners reintegrate into society, as it looks to add more tools to serve a wider scope of the community.

"A promotion for new software called The Re-Entry App was shared at the top of some users’ Instagram feeds on Wednesday. The notification, proposing help with “preparing for life after prison with community support,” asked users to click for early access to try the app and provide feedback."

Twitter user Becky Abraham posted this screenshot of the Instagram alert that she was served in the app. 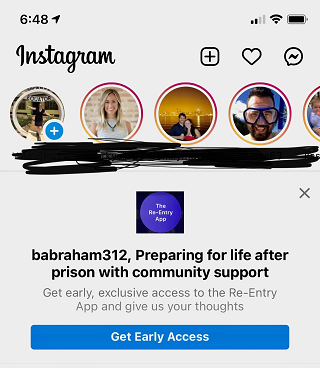 Facebook later confirmed the test, saying that the alert was made public by mistake, with the app only in internal development for now. Facebook further explained that the app is designed "to help close gaps faced by those in marginalized communities across our apps".

Facebook has been looking to expand its use case in this respect for some time, by providing more tools for more sections of society as it seeks to address inequity. Facebook CEO Mark Zuckerberg has previously noted that he wants the company to start “building products to advance racial justice”. As noted by Bloomberg, Instagram also has an equity team which is focused on building “new features that respond to the needs of underserved communities.”

Within this scope, the development of a reintegration app makes sense, though there'll no doubt be some concern as to how Facebook utilizes the user data entered into the app, and where exactly such information is being stored, who has access, etc.

It seems like a risky proposition, but that, of course, depends on the full working process, how the app is set-up, and what it's designed to do. We don't have that info as yet, but it is interesting to see where Facebook is focused, and what it has in development, particularly in terms of serving more community needs.

Essentially, this seems like a good initiative, though Facebook's past record on data privacy will likely work against it.

We'll wait how exactly the Re-Entry App might work.