Have you ever been watching a Reel on Facebook and thought ‘man, I really wish I could assign a Reaction here to show the creator how I feel about it, in emoji form’?

Well, you may be in luck, with Facebook now developing Reels reactions, which would provide another way to respond to its short-form video content. 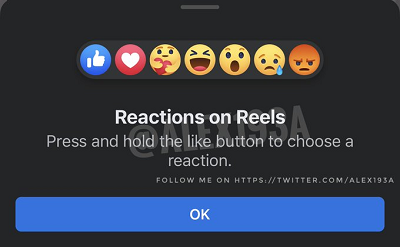 As you can see (in this example posted by Alessando Paluzzi), and would expect, Reactions for Reels would enable you to assign one of seven emoji responses to a Reels clip. Right now, on both Instagram and Facebook, you can Like a Reel, or comment, but that’s the extent of your response options, and if you’ve gotten used to being able to quickly attach an emoji to signify your feelings, that can feel limiting.

So it makes sense for Facebook to expand its engagement options by adding more smiling and frowny faces – though it also feels a little unnecessary, maybe?

I mean, the idea of short-form video engagement is that it’s quick, with the capacity to provide maximum context in the shortest possible time. Do you really need to be able to reply with an array of emotions, in emoji form?

I guess, as noted, Reactions have become a habitual behavior for many, and in that context, it would bring Reels more into line with Facebook’s other options, while it could also become another algorithmic sorting factor to help highlight the most relevant clips to each individual.

But, I don’t know, it just seems like too much, on such short clips. Do you really have a complex range of emotional responses to Reels? Like, you like it or you don’t, right – and Facebook could determine such either way by measuring the time you spend watching each clip, responses like comments, shares, etc.

It seems like an unnecessary complication in some ways – but then again, if you don’t like it, you won’t have to use it.

There’s no word on a full test or roll out of Reels Reactions at this stage.