You know the byline that used to appear on some of the articles you saw in your Facebook feed, like this one: 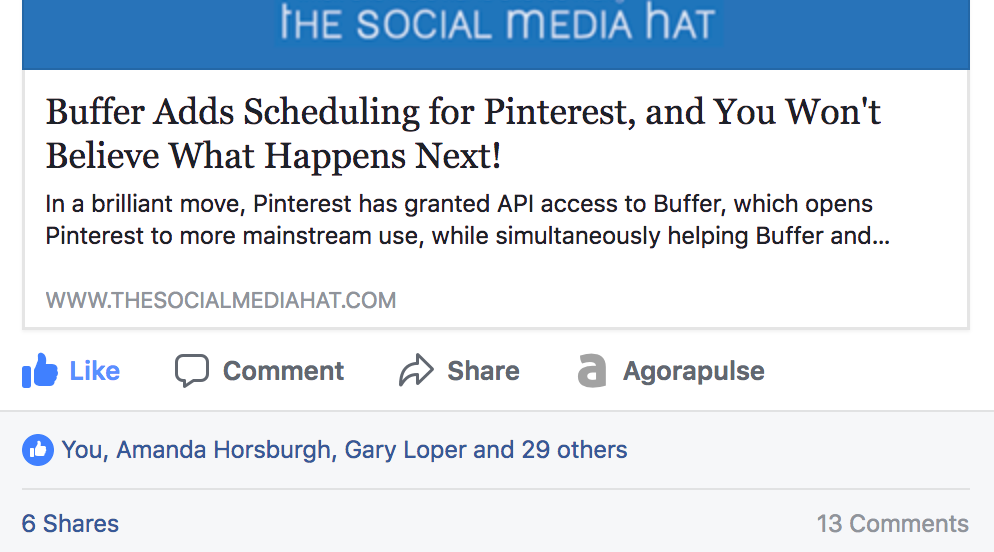 This was first noticed the morning of Tuesday, Oct. 10th, and it was initially hoped that the missing byline was just a temporary bug. However, days later, the byline and functionality haven’t returned.

For some of you, Facebook Authorship may be something you never even noticed or heard of, and therefore nothing to be missed. For many, however, it was a feature that they took time to set up and appreciated the additional personal branding and visibility it offered.

On June 18, 2015, Facebook released a feature designed to give journalists more credit and visibility for the articles they were writing, regardless of where they were being published.

It was called Authorship, and it resulted in the byline that you saw above, as well as the ability to easily follow that journalist and see when they shared new articles publicly.

All journalists had to do was enable “following” in their profile settings so that others could follow their public posts, and publishers needed to add a simple meta tag with a link to the author’s Facebook profile.

I wrote about the feature extensively as I saw brilliant opportunities for bloggers and brand publishers to grow their audience. I provided instructions for setting up every major blogging platform because the byline was displayed on shared content regardless of who shared it.

Since then, I’ve accrued nearly a thousand public followers, but I haven’t seen too many other people talking about Facebook Authorship. And many bloggers have yet to implement it.

In fact, a month or so ago, Ana Hoffman pointed out to me that Facebook Authorship bylines weren’t displaying at all on mobile - only desktop. Was that a sign of things to come?

So that brings us to today, 28 months later, and Facebook Authorship appears to have been completely deprecated.

Just scroll through your feed and you won’t find any instances of the clickable byline. As we saw above, it’s been completely removed, even from posts that are years old.

Regardless of whether the posts were shared by a profile or a page, if the link would have had an author byline, it no longer does.

Furthermore, if you had ever used the Facebook Debug tool to scrape a new article and force Facebook to pull in all of your meta data, you would know that the Facebook Authorship tag - the article:author tag - was one that was pulled in.

The tool has reverted back to only looking at and for the standard Open Graph tags of Title, Description, Image, etc.

There’s been no official news from Facebook about this, and a request for comment was not immediately responded to.

So what’s really going on?

As it turns out, Facebook may have something better in mind.

We all know that Facebook has been reluctantly drawn into the most recent Presidential elections and subsequent fervor due to the questionable use of Facebook Ads to target key voting segments with inciteful content.

On top of that, regular Facebook users were constantly sharing or seeing news articles in their feed that purported to be about one candidate or the other, claimed to be truthful news stories, but were in fact completely made up. Fake news.

As a result, Mark Zuckerberg and team have been working hard to make sure that every ad or story that appears in a user’s feed is legitimate.

One feature that’s being tested right now is called Article Context. It’s designed to give Facebook users the tools and information they need to determine whether a particular piece of content is real rather than fake.

If completely rolled out, every shared article would have a button offset over it like this:

When clicked, if Facebook will provide information on the publisher, such as a Wikipedia page or other articles shared, or even how this specific article is being shared and received by others on Facebook. 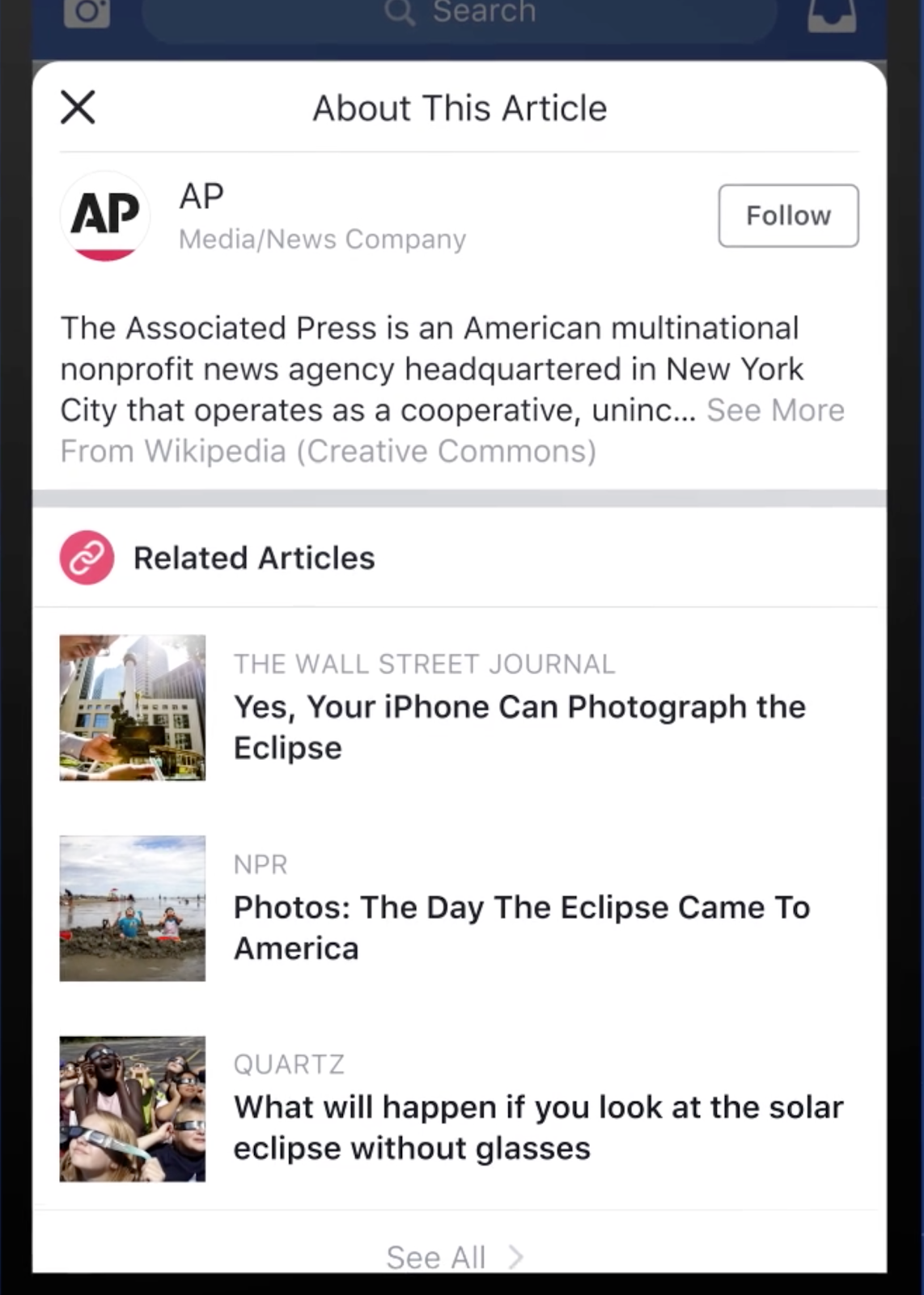 This may have nothing whatsoever to do with Facebook Authorship, it may simply be a coincidence that Article Context was announced around the same time that Authorship disappeared.

It's also been reported that Facebook users have a new tab within Settings called “Linked Publications” which enables them to add specific Facebook Pages and publishers that are allowed to include a byline on shared content.

I added my Facebook Page and refreshed an existing post, as well as ran it through the Facebook Debug tool, and still no byline. Perhaps Facebook is replacing the old authorship with this new form that gives authors more control over where their byline appears. 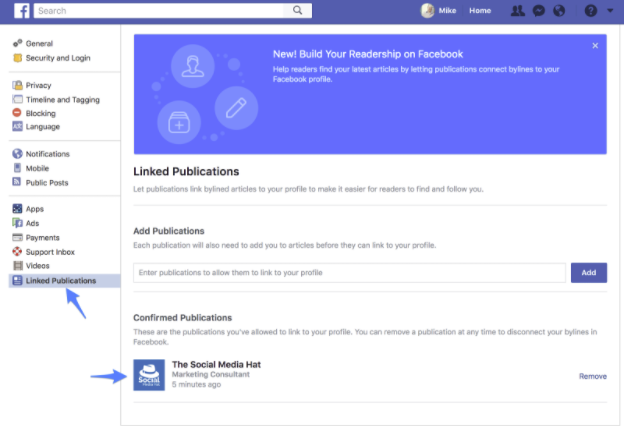 The truth is, we won’t know what happened until Facebook makes an official statement. In that event, this article will be updated accordingly.

Unfortunately, no matter what Facebook’s intent, Authorship certainly seems to be gone. It’s highly unlikely that a simple bug would have lasted this long, and that the Debug tool would also have been adversely affected.

Technically, bloggers and brands who implemented Facebook Authorship have nothing they need to do, similar to how Google Authorship simply went away with no ill effects - the meta tags that you have in place can remain there without issue.

In fact, I would strongly discourage anyone from taking the time to remove such tags and authorship setup. They’re not hurting anything, and if this should turn out to be a bug or a bad idea and start working again, you’ll want those tags in place.

If, however, you were just learning about Facebook Authorship and considering setting it up, I would put those plans on pause for now, and see what the official word is from Facebook when it comes.

In all likelihood though, Facebook Authorship has been permanently removed due to lack of implementation, and we won’t be seeing it’s like again.

Given that brands and marketers around the world have twice now been tasked to set up authorship (Google, then Facebook), only to have it taken away later, I hope this is the last such attempt. While I appreciated both ideas, we all have better things to do.

Questions? Please leave them in the comments below.