After previewing it as a coming feature within its announcement of the expansion of remixable videos on the platform last week, Instagram has now outlined its new display of scheduled live streams on creator profiles, providing another way to raise awareness of upcoming live broadcasts in the app. 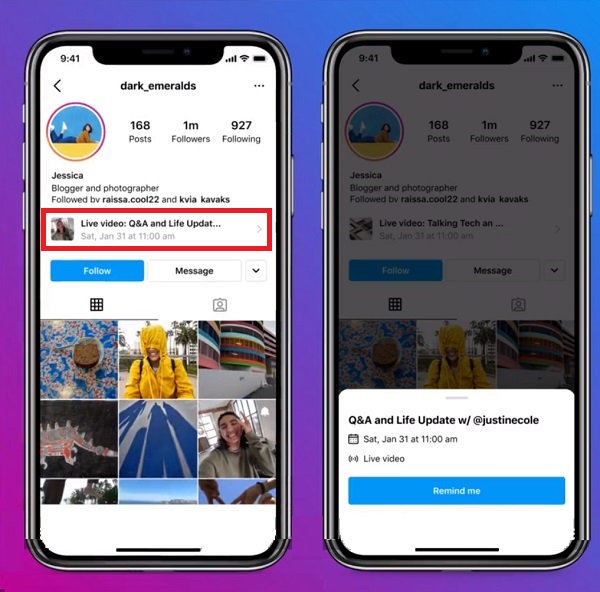 As you can see in these screenshots, shared by Instagram chief Adam Mosseri, the new display option will enable you to list your upcoming IG live streams on your profile, which, when tapped, will provide additional info in a pop-up prompt, where people can also sign-up for a reminder of when the stream is set to begin.

“Creators have been able to schedule lives for a while now, but now, you can separate scheduling a live from creating a feed post, or even now a Story post, about that Live. You also get a little badge on your profile that’s lets followers know, or anybody know that goes to your profile, that there’s a Live coming up and they can subscribe to be reminded.”

Mosseri further notes that users can create as many scheduled lives as they like, with a side-scrolling list then added to your profile display.

It could be a handy addition for those who broadcast via IG Live, which could prompt more people to tune in, by raising more awareness about your broadcasts. Up till now, the only way to notify people about your upcoming streams in the app has been, as Mosseri notes, through posts and Stories, which limits the reach of those notifications to, generally, your existing followers. Now, anyone who comes by your profile will be able to see that you have a live broadcast coming up, which could bring in more viewers.

IG Live has become a key connection surface in the app, particularly throughout the pandemic, and as Instagram looks to expand the option into eCommerce, facilitating more direct engagement between brands and fans, the capacity to map out a more effective IG Live strategy could be a big help in maximizing your on-platform efforts.

It may seem like a relatively small addition in the broader scheme, but it could be a big help in raising awareness, and getting more viewers to your upcoming broadcasts.