Instagram is rolling out yet another Stories tool, with some users now seeing a new 'Group Stories' option which enables users and their friends to collaborate on a private Story.

As shown in this tweet from lifestyle blogger @cuteek, the new option is aligned with Instagram group chats, providing another way to engage and interact with group members.

The option was initially spotted in testing by reverse engineering expert Jane Manchun Wong back in October. 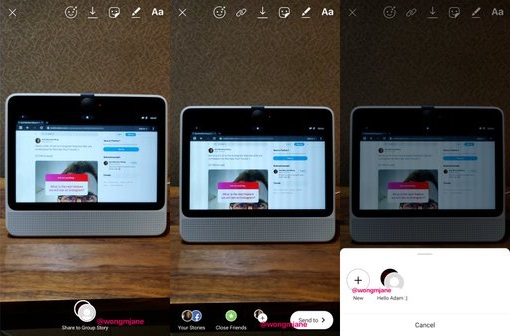 In many ways, it's similar to Facebook's Group Stories option which is rolled out to all users in October last year.

With the use of both Facebook groups and Stories rising, providing an option for collaborative group stories makes sense - though on Facebook, they'll likely have a larger audience, as most groups have more members than your average Instagram group chat.

Instagram has also seen a rise in private messaging use. Back in October, Instagram launched a separate messaging app called 'Threads' to cater specifically to this purpose.

Instagram will be hoping that by providing more tools on this front, it'll be able to maximize interest in group messaging use, and boost engagement. And definitely, having the capacity to create your own, private stories with friends will have a level of appeal.

It could also hold a level of appeal for brand use - though it is worth noting that Instagram Direct groups are limited to 32 people.

It's not clear if the option is being rolled out to all users as yet, or if it'll be launched in phases, but you can likely expect to see it appear in your Instagram message threads sometime soon.