Instagram is looking to provide more protection for young users with a series of updates, including defaulting teenagers into private accounts and restricting its ad targeting options for younger audiences - which could have a big impact for digital marketers.

"Wherever we can, we want to stop young people from hearing from adults they don’t know, or that they don’t want to hear from. We believe private accounts are the best way to prevent this from happening. So starting this week, everyone who is under 16 years old (or under 18 in certain countries) will be defaulted into a private account when they join Instagram." 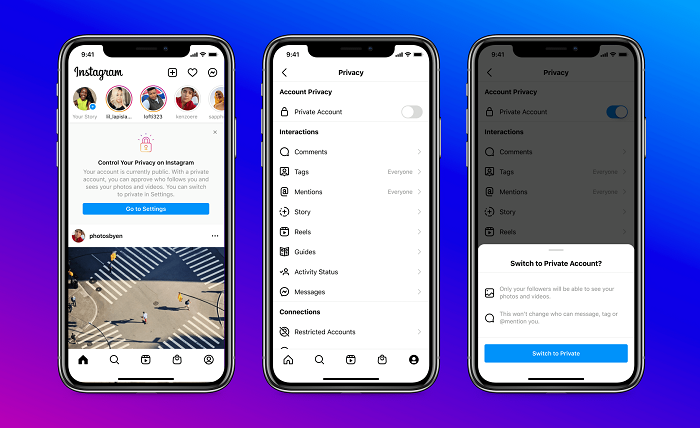 As you may recall, back in March, Instagram implemented new restrictions on adults seeking to send messages to users under the age of 18 who don’t follow them. This new update expands on the same, with new accounts created by young users now to be set to private in the first instance.

Of course, users will still be able to switch their accounts to 'Public' instead, so it's not a restriction as such, but Instagram says that, in testing, it's found that more young users choose to remain in private mode when they're defaulted to that setting, as opposed to being given the option between public and private.

It's an important consideration for Instagram, which is hugely popular among younger audiences, and has faced various challenges in policing interactions with underage users. But at the same time, the change could also limit content exposure in the app, with private accounts seeing far fewer interactions, and with young users also regularly posting to TikTok as well, which is more focused on showcasing posts to a broader range users, garnering more engagement, it could see Instagram lose some traction as the platform of choice for youngsters.

Could that limit Instagram's appeal, and become a growth concern for the app? Clearly, Instagram is leaning towards safety instead, which seems like the better way to go, but it may have expanded engagement impacts.

It is also worth noting, in this context, that TikTok implemented virtually the same policy back in January, with accounts for users aged under 15 set to private by default. That could negate any significant impacts from a content reach and engagement perspective.

In addition to this, Instagram's also implementing a new process which is designed to further limit the exposure of content posted by young users to those that have previously displayed predatory behaviors in the app.

So now, if an older user has come under scrutiny for any such incident, Instagram's systems will limit their content exposure, by no longer showing them posts from young people’s accounts in Explore, Reels or ‘Accounts Suggested For You’. They also won't be able to follow young people's accounts or see comments from young people on other people’s posts.

The new system is being rolled out in the US, Australia, France, the UK and Japan from today, with further expansion coming soon.

And finally, Instagram - and in fact, Facebook more broadly - is also implementing new restrictions on the ad targeting options available for audiences under the age of 18.

"Starting in a few weeks, we’ll only allow advertisers to target ads to people under 18 (or older in certain countries) based on their age, gender and location. This means that previously available targeting options, like those based on interests or on their activity on other apps and websites, will no longer be available to advertisers. These changes will be global and apply to Instagram, Facebook and Messenger."

That's a big change - with this, that means that if you're looking to reach younger audiences, you won't be able to use interests, like, for example, sports they engage with, or their entertainment preferences, nor will you be able to use your own in-app activity measures to maximize ad performance among these user groups.

Instagram says that youth advocates have advised that young people may not be well equipped to make purchase decisions based on this type of targeting, which is why it's moving to limit its options. Which will have big impacts for any brand seeking to reach young consumers across Facebook's apps.

Realistically, that probably means that brands looking to target young consumers will turn to TikTok and Snapchat instead - but then again, Facebook's probably noted that such businesses are shifting focus this way already, making this less of a business concern in this respect.

As such, it seems like a positive step, which could also paint Facebook in a better light in regards to protecting younger users over its own profit margins. But without knowing the economics at play, it's hard to know how much of a true sacrifice or risk this might be for the company.

"When young people turn 18, we’ll notify them about targeting options that advertisers can now use to reach them and the tools we provide to them to control their ad experience. If you’re a business looking for more information, please visit our Help Center."

That could spark a significant shift in ad spend for some brands, with media buyers now needing to change their approach, which they've already been working to update in light of Apple's ATT update. Then again, maybe more younger audiences are opting out of in-app tracking anyway, and Facebook's simply moving in-line with this shift - and again, re-framing this into a PR winner, even though it was already largely in effect.

However you look at it, it's a significant shift, and one which will force many to update their digital outreach process.