Oh look, Instagram is once again following the lead of TikTok with a new feature, what an astounding surprise this is.

Today, Instagram has launched a new ‘Add Yours’ sticker for Stories, which enables users to prompt others to respond to their Stories content, in order to create more engaging reply threads to Stories posts. 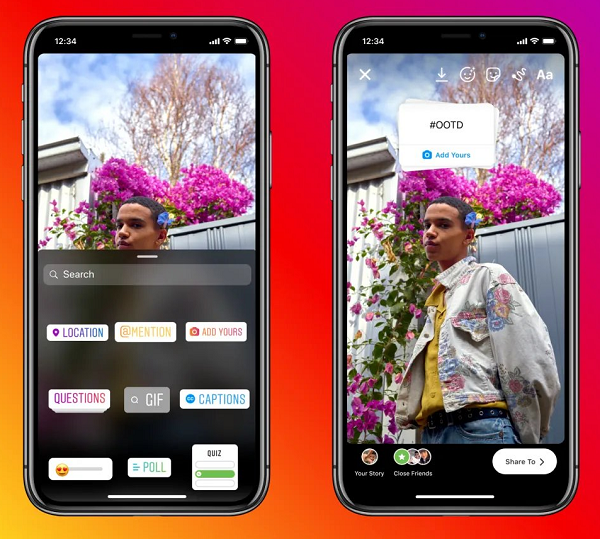 As you can see here, now, users can add the new ‘Add Yours’ sticker to their Stories frame, with the example using an ‘outfit of the day’ prompt, calling for followers to respond with their own #OOTD image. 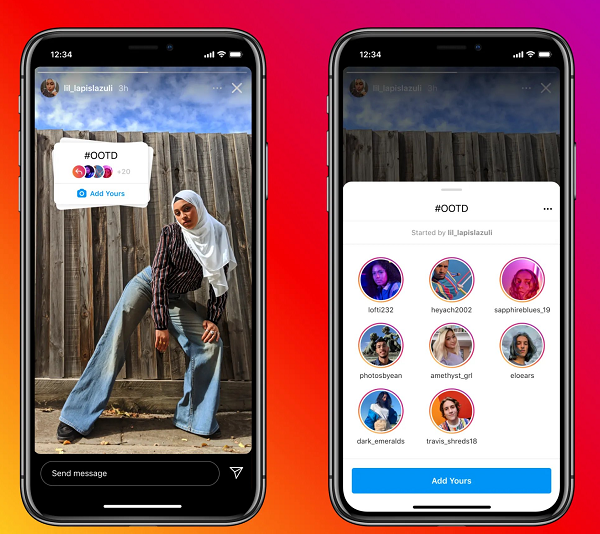 When users respond, they’re added to the profile bubble listing on the sticker, which, when tapped, enables users to go through all the other responses to the thread, building a response chain within Stories that can help prompt more engagement.

Which sounds a lot like TikTok’s Duet feature, which often sees many users adding to a Duet chain, creating long, interactive streams of content based on the original theme.

@mlioncross Do not let this flop! I had dirt on my face after my #duet with @talib.lyy . ‘Care to continue? #bestvibes #fyp #funny #candyshop ♬ son original - Adele_tsdr

The engaging, community-based creativity of TikTok is a key element in its appeal, so it’s no surprise to see Instagram, once again, taking inspiration from its now key rival. But at the same time, it’s a bit much - Facebook’s repetition sometimes feels like it’s going too far to try and latch onto these usage trends.

I mean, it makes sense – TikTok is seeing huge engagement, and Instagram wants to hook into that wherever it can, in order to keep users from migrating away from its app, and if it can utilize similar functions, it probably should at least test and see what results it gets. But it’s a fairly obvious replication here.

Maybe it works, so who really cares? But still, Instagram, and Facebook (or Meta) more broadly, is not very good at coming up with new, original ideas in this respect.

Which will be a key impediment to its new push to win back younger audiences, with Facebook CEO Mark Zuckerberg recently noting that it will make serving young adults a priority in its products, rather than optimizing for older users. Facebook knows that it needs to maintain engagement with younger user groups to maximize take-up of its advanced, metaverse-aligned offerings, and the data shows that it’s losing on this front, with Facebook usage among people under the age of 24 declining over the past decade.

A key issue in this sense is that Facebook simply lacks cultural nous, and understanding what younger audiences respond to – which is why Snapchat is regularly able to spark and lead new trends, and now TikTok has become the main vehicle for the same. Instagram did once have that cultural presence, that direct line with creative online communities, but over time – since Facebook took over – it’s also lost touch. And while the graph above doesn’t relate to Instagram usage, you can bet that the same trends are likely happening on IG as well, hence the renewed focus from Zuck on younger groups.

Which is relevant here because of the replication. Yes, Facebook has seen success in stealing features from Snapchat and TikTok, to varying degree, with Instagram Stories being the key winner, while Reels has also been a hit for Instagram, even if usage still trails well behind TikTok. But it’s not helping Facebook win the broader cultural shift, Facebook is no longer seen as the innovator, it’s lost its cool factor in this respect, because of the constant replication.

Or maybe not because of this, but it’s an element in the wider shift – Facebook’s become very good at bringing these features to less web-savvy users who aren’t active in these other, newer apps.

But for those that are always across the next key trends - like, say, younger audiences - Facebook’s replication just seems stale and second rate. It’s the older people catching up on things behind everyone else, then telling you about this cool new feature that you’d already been using well before they came across it.

That’s the inherent failure in Facebook’s replication approach, that it constantly leaves it a step behind, rather than being a leader – and if it’s not a leader, it loses that cool cred, and younger audience engagement as a result.

So it might work, in a broader sense, in terms of deriving in-app engagement on the back of these usage trends originating from other apps. But really, it’s like the corporatization of these shifts, and unless Facebook can change things up, and start leading the way on some of these key trends, I don’t see how it’s going to win back the youth.

Instagram had been testing the ‘Add Yours’ sticker with some users over the past month, but it’s now being rolled out to all users globally, on iOS and Android.