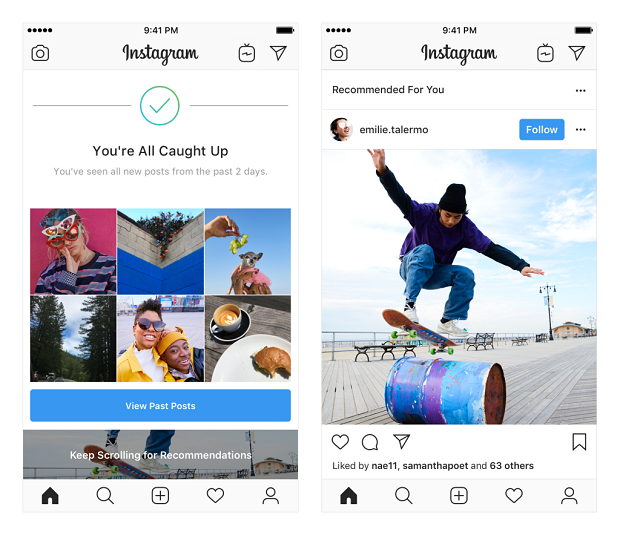 “You’ll see recommended posts at the end of your Feed, once you’ve seen everything new from people you follow. When you see the “Recommended For You” message, you’ll have the option to view your past posts or keep scrolling for your recommendations. And, if you’re interested in seeing more from the accounts shown in your recommended posts, just tap on the blue button to follow them.”

The tool is something of a compliment to the ‘All Caught Up’ notification which Instagram rolled out last month – now, once you’ve seen all the latest posts, Instagram will use the opportunity to highlight a selection of content that would normally appear in your Explore tab, customized to your interests.

It also somewhat lessens the community health aspect of the 'All Caught Up' tool, in that many saw it as a way for Instagram to help you better manage your usage, and not spend excessive time scrolling through your feed aimlessly, as you’d know when you’d seen everything new already. This tool somewhat lends itself to that same type of mindless scrolling, though it does give you a prompt before moving into the recommendations, as opposed to just showing them in stream.

Back in 2013, Facebook rolled out its now infamous News Feed algorithm to help show users the most relevant content, because people were simply following too many Pages, or were connected to too many people, collectively producing more content than anyone could view every single day. At the time, Facebook said that the average Facebook user had around 1, 500 posts eligible to appear in their News Feed on any given day, a massive amount of content – but it’s interesting to note here that, on Instagram, that’s clearly not the case.

It seems that Facebook, and likely Twitter too, being at the beginning of the social media shift, fell victim to their own success to a degree, with excited users following every page and connecting with everyone they could - a novelty to some degree, and sometimes as a means to get more people to follow back. That's lead to increasingly cluttered feeds – and thus, algorithms – but the fact that Instagram has seen fit to roll out its ‘All Caught Up’ and recommended posts tools suggests that users have taken a different approach on that platform, and arguably a more mature approach to social media overall.

I mean, Facebook has tried – back in May, some users spotted pretty much the same thing on The Social Network’s main app, with a prompt once you’d seen all the new stories in your feed. 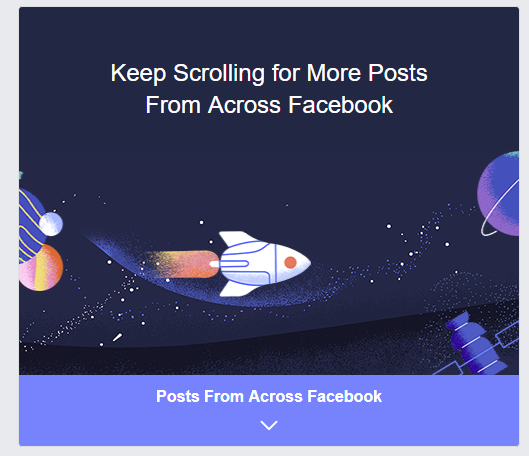 But theoretically, based on the News Feed algorithm logic, that would only actually show up to a very small amount of users - because if a significant number of users were getting to the end of their News Feed, having viewed all the latest posts from friends and Pages they follow, the algorithm might not be needed.

That would suggest that on Instagram, which has risen to prominence in the last few years, after the initial social media boom, users are probably more selective about who they follow, which could be exactly why it’s seeing more engagement.

That’s interesting to note because it suggests social media users are becoming more selective in their process, that social media habits are maturing as users come to be more familiar with options like unfollowing, and are more wary about blindly following brands.

What does that mean for marketers? You likely need to work harder to get attention. That’s the case on Facebook anyway, with the algorithm rewarding engagement, but with Instagram users – and newer social media users more broadly – getting more selective, you need to be tuning into your target audience more than ever to improve performance.

Instagram’s new recommendations feature will be rolling out to selected users “over the next few days” with a view to a broader expansion “in the coming weeks”.