While you obviously want to lure as many viewers as you can with your video clips, some tactics on this front can be questionable, and can be annoying to viewers.

Meta is calling these tactics ‘watchbait’, which it says includes using things like withholding key information, sensationalizing content, or misleading viewers about the true nature of the video.

“These tactics can be deployed in any part of the post or video, including the text, thumbnail, or content of the video, and ultimately are used to lure or bait people into watching the full video.”

People don’t like this, and according to Meta, feedback from its users is they don’t want to see this approach in their feed. So now, Meta’s doing something about it.

“Given users’ preferences and the baity nature of watchbait videos, we use a system that detects watchbait holistically across a video post and, if detected, reduces its distribution. Videos that are considered watchbait may not be recommended to viewers and/or may receive limited ranking. And repeatedly posting watchbait may result in that Page’s overall distribution being reduced.”

That’s a pretty big concern - you don’t want to be tagged as watchbait and see your Page reach decline ever more, while how exactly Meta’s automated systems determine such is also pretty opaque, which will spook a lot of creators.

So how do you avoid posting watchbait?

Meta has provided some examples of what it will now mark as watchbait in video titles and descriptions:

Meta further notes that video titles like this are examples of watchbait: 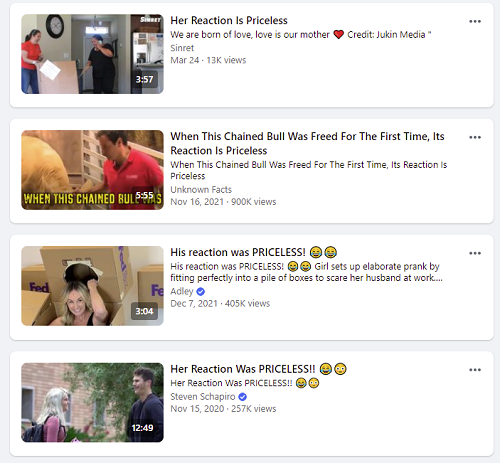 Meta also says that thumbnails, titles or video descriptions that suggest that something happens in the video, when it actually doesn’t, are also annoying for viewers. 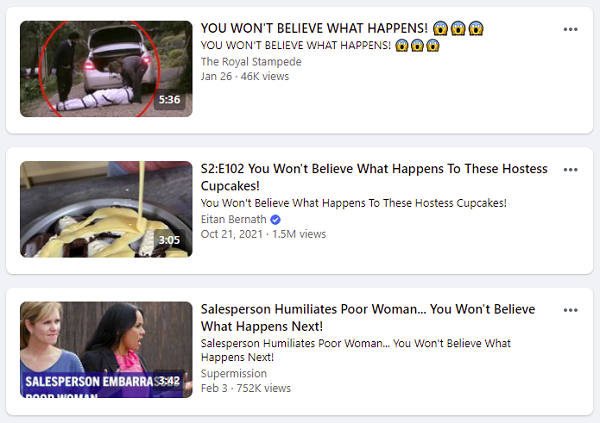 I mean, you probably will believe it, because it’ll be a let down – but as you can see from the view counts on these clips, such approaches do work in getting people to tap through, and getting them to view video content.

But now Meta’s had enough, which is important to note in your video content approach.

If you want to play by the rules, and avoid potential penalties, Meta has also published a new overview of Watchbait Best Practices to help guide your approach. 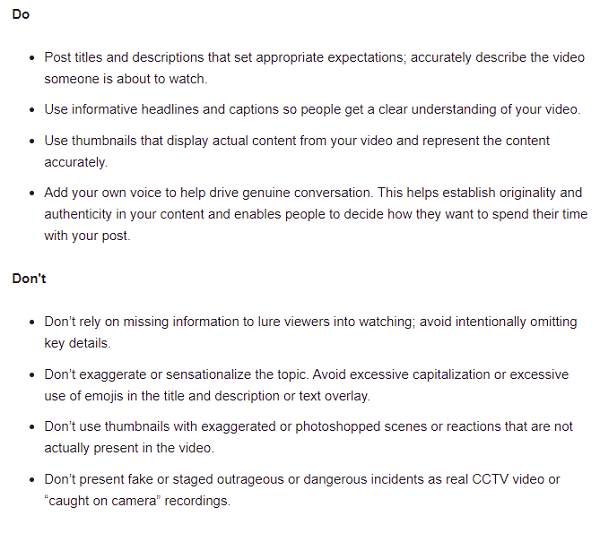 The ‘Dont’s’ here actually describe so many videos online, with every other YouTuber posting exaggerated titles and thumbnails to lure clicks.

It’ll be interesting to see how Meta can enforce such, and how harsh its new detection process actually is. But either way, for video creators, it’s important to note this new crackdown, and how to play by the rules to avoid potential penalty.

You can read more about Watchbait on Facebook here.