Meta has published a major new report on public perceptions around climate change, and what can be done to address the impacts of such in various ways.

The 123-page report, conducted in partnership with Yale University, incorporates responses from 108,946 Facebook users from 192 countries, which provides a massive pool of insight into what people understand and feel about the climate crisis, and the global efforts being made to mitigate human impacts, where possible.

You can download the full ‘International Public Opinion on Climate Change’ report here, but in this post, we’ll take a look at some of the key notes.

First off, the report shows that the majority of people in nearly all countries are at least ‘somewhat’ or ‘very’ worried about climate change and its impacts, including more than 90% of respondents in Central and South America regions. 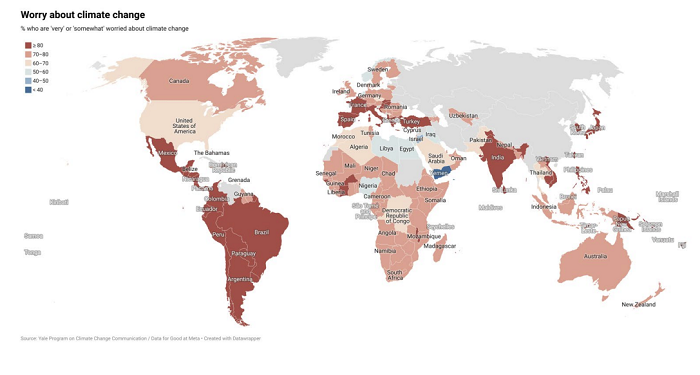 As you can see here, global concern around climate change is now pretty much universal, while regions in tropical climate zones, which are already dealing with significant climate impacts, are increasingly looking for governments to take more action.

“In almost every country, majorities saw climate change as a threat to their country or territory over the next two decades, while a majority in two-thirds of the countries and territories surveyed think that climate change will harm future generations a great deal.”

The data also reflects growing acceptance of the role that humans play in climate shifts, with European Facebook users being most likely to agree that climate change is caused by human activity. 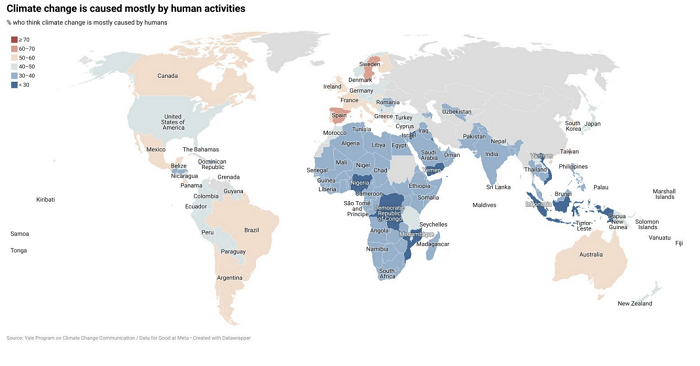 Which, of course, has been the scientific consensus for many years, but remains a point of contention among climate skeptics. But with 97% of climate and meteorological experts in agreement that human inputs can and do impact the climate, it’s clear that there are things we can implement to better our environment for the future.

Which Facebook users are now looking to their governments to enact:

“People everywhere think that climate change should be a high priority for their government. Majorities in most countries in North and South America say it should be a “very high” priority.” 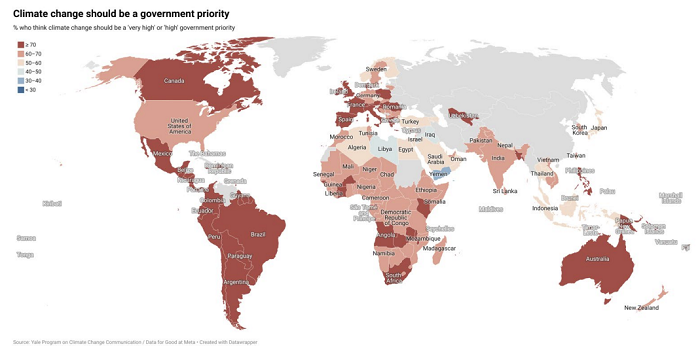 Interestingly, most respondents also don’t believe that action to combat climate change will have negative effects on the economy, another key concern among skeptics and critics.

It’s taken some time, but it seems that broad acceptance of climate science is now becoming the norm, and it’s interesting to consider whether efforts made by social platforms to address climate misinformation are having an impact in this respect.

All social platforms have been taking steps to address climate misinformation, via fact-checks, informational prompts and reach restrictions on posts related to climate topics.

Twitter took things a step further in April, by announcing a total ban on climate misinformation in ads, while Pinterest went even further than that, by outlawing all false claims about climate change across posts and ads in its app.

Meta hasn’t taken as strong a stance, but it has expanded its fact checks on misleading climate posts, and it has sought to raise awareness of accepted facts via its Climate Science Center as well as in-stream prompts.

But many have criticized Meta’s approach - especially given research which shows that Facebook posts that include misleading climate claims are being viewed in the app over a million times every day.

Which makes it all the more interesting that Meta has published this report, which, if anything, suggests that there would be widespread support for the company in implementing a total ban on climate denial content.

Maybe this will lead to Meta taking a harder stance on such in future. For now, however, Meta is only offering insights into its own, business-specific contributions to address the issue.

“In 2021, Meta helped restore more than 2.3 million cubic meters of water through investments in water restoration projects. [We’re also progressing] towards our goal of reaching net zero emissions across our value chain, and maintaining 100% renewable energy for our global operations.”

Which is great, and Meta deserves credit for its progress. But the most significant impact Meta could have would be in addressing the spread of climate misinfo in all forms across its family of apps - and to the 3.64 billion people that use them.

You can download the full ‘International Public Opinion on Climate Change’ report here.