Facebook User Growth Back on Track, Revenue Declines in Q1

Facebook has managed to get its user growth back on track, lessening market concern, though revenue growth has slowed in Q1 2022, partly due to the war in Ukraine, among other issues.

In its first performance update of the year, Meta has once again underlined its enduring performance capacity, even as it focuses on the next stage of digital connection, after a decline in usage last report had some questioning whether it had plateaued, and was now on the decline in the eyes of users.

First off, on daily actives – Facebook DAUs came in at 1.96 billion on average for March 2022, an increase of 4% year-over-year 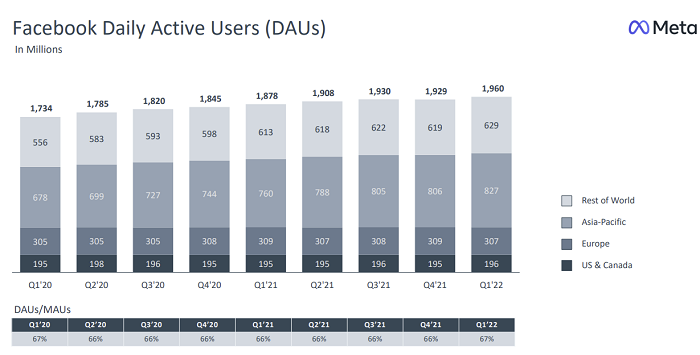 The majority of Facebook usage growth came, once again, from the Asia Pacific region, where the app is still branching into developing markets, and seeing steady take-up.

Though you will also note that Facebook’s daily usage rates declined by 2 million in Europe, and only saw a slight increase in the US. Facebook usage has fluctuated in both markets for some time, and it may well be that Facebook has indeed reached its optimal take-up in these regions.

Though at the same time, a huge amount of people are still logging into Facebook in these markets every single day. That likely speaks to the key connective role that the app now plays on the modern interactive process – though I would still like to see just how long people are actually spending in the app, and how many are simply logging on to check their notifications, before spending the majority of their online time elsewhere.

The decline in European usage is much more pronounced here (-9 million), which does seem to point to declining popularity of the app in some markets.

Though that also likely relates to Russian bans. Facebook reportedly had over 70 million users in Russia as of February 2022, before Russia’s communications regulator moved to block Facebook access entirely in early March, in response to Meta’s restriction of Russian state media outlets.

In which case, Facebook likely lost a lot more active users than what’s shown here - but that’s not Meta’s fault, nor is it reflective of a trend away from the app.

But it could make Meta’s user numbers look a lot worse in Europe in Q2, depending on how things progress.

Overall, however, the numbers show that Facebook remains hugely popular, while Meta’s ‘Family of Apps’ chart, which includes unique users across Facebook, Messenger, Instagram and WhatsApp, has also continued to inch up.

The variance between this chart and Facebook usage in isolation suggests that there are around 700 million users not on Facebook that are logging into these other apps each month.

But again, the more interesting consideration here is how long people are spending in Meta’s apps – because while most people will log on to see what their friends and family have shared each day, I suspect that many are now spending a lot more time in TikTok and YouTube instead.

This seems like the much more informative stat, and Meta hasn’t provided anything official on this front for some time.

In terms of revenue, Meta brought in $27 billion for the quarter, up 7% year-over-year: 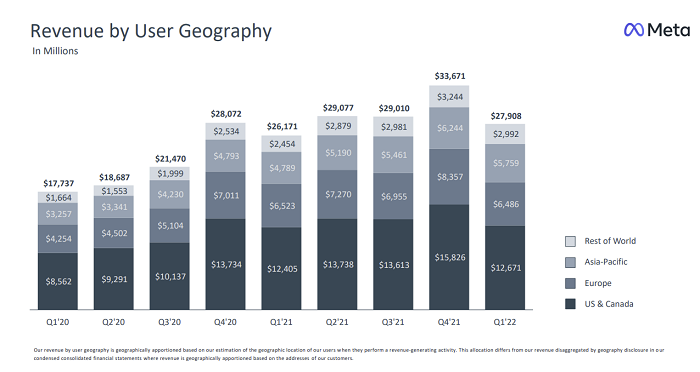 The decline in revenue in its biggest two ad markets will be a concern, though Meta does note that ad impressions delivered across its apps increased by 15% year-over-year.

Meta’s still grappling with Apple’s ATT update, which has limited its data collection capacity, which it’s previously noted would drag its results down by around $10 billion in 2022 alone. Meta also says that revenue ‘softness in the back half of the first quarter’ was exacerbated by the war in Ukraine, while at the same time, it continues to invest in emerging technologies, driving increased spend. 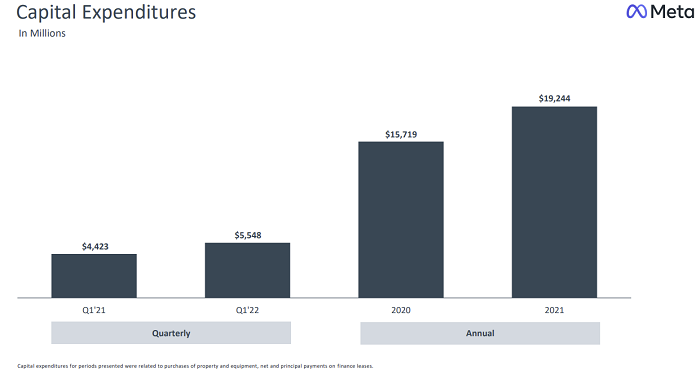 That’s an inevitable impact of its focus on the future, but that focus is also, in Meta’s view, what will secure its ongoing performance, and there’s much to come on this front.

In many ways, the company is in a transition period, which Meta itself has explained to the market within its recent statements. As it looks towards the next stage of connection, that, inevitably, will impact on current day performance. Increased R&D cost is the most obvious hit, but it also means that virtually every project, within each of its apps, now has to build with an eye toward the future, which means longer development cycles, increased complexity, and more labor time as a result.

The Metaverse may well be the future, but shareholders are essentially betting on Zuck’s nous here, in the hopes that he’s right - because as we’ve seen, Meta’s core apps are already feeling the pinch, and it doesn’t seem like it’s shifting its approach, with costs continuing to rise, and more resources being directed towards increasingly expensive hardware releases.

If Meta truly believes in the Metaverse shift, that will likely also see it take another hit on the retail costs of its VR headsets, and eventually its AR glasses, because the real money is in mass adoption, and expanding Metaverse engagement.

In essence, while the market probably isn’t overly excited Meta’s results now, it’s not likely to look a lot better for some time yet. And if the Metaverse ends up taking a decade to become the next plain of digital existence, as Meta has predicted, that’ll definitely stretch the patience of $FB holders.

For users, Meta will stay the path with increased eCommerce integrations, and more opportunities for creators to make money in its apps. The latter could also feed into the Metaverse as well, with a new fund already set up to support VR creators, and more education programs to guide artists and influencers into the next space, in the hopes that they’ll bring their audiences with them.

Instagram remains focused on beating TikTok at its own game, while WhatsApp is still working on business tools, which could major potential in developing markets.

But really, it’s all about the Metaverse, and setting the foundation for the next stage. There are exciting developments here, but they’re not coming soon - it’s not just a matter of flicking a switch and ushering in the next stage.

Which means that a level of patience is required, something that the market is not renowned for.