Meta Publishes New Report into the Opportunities of the ‘Creator Economy’

Yeah, I’m still not sold on the ‘Creator Economy’, as the ‘economics’ in question still don’t really work or anyone by the platforms themselves.

Meta is one of those beneficiaries, and with its metaverse vision looming on the horizon, it’s very keen to maximize connection and engagement with creators, so that they’ll then lead the charge into the next phase of digital connectivity.

With this in mind, Meta recently commissioned a new report on the state of the Creator Economy, and its opportunities, which, on the face of it, includes some very encouraging signs about the future of social apps as incubators of creative talent.

That all sounds great, right? More people earning more money from their passions, and building careers that truly matter to them, based on the things that they’ve chosen to explore and develop, the things that they love which they’ve been able to showcase, largely via social media.

All good – but then, also, there’s this listing of average annual creator earnings: 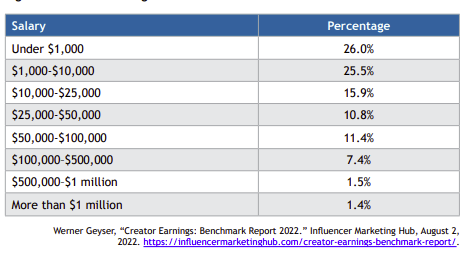 As you can see in this listing, only a fraction of creators are actually earning a living wage from their work, with a little over 10% of creators earning more than $100,000 per year.

“The Creator Economy follows this general pattern. Its superstars - like PewdiePie, MrBeast, Ryan Kaji (of Ryan’s World), and Khaby Lame - can make eight figures a year and bring in as much as $2 million for a single post. But they are exceptions that prove a rule.”

That’s not exactly a great endorsement for the opportunities of the ‘economy’, as again, it’s the platforms that glean the most benefit from this content being posted and hosted on their sites.

But no matter – according to Meta:

“Many creators are passionate hobbyists, and a growing number are social and political activists, principally motivated by the desire to make an impact and serve causes bigger than themselves rather than money, fame or follower count.”

So they don’t really want money anyway, so all good, the Creator Economy is great, and we all win, because we all get what we want.

The report itself does also highlight the need to establish more equitable processes to ensure more creators are rewarded for their work, and this is improving over time. But it still feels little skewed – it still feels like the concept of the Creator Economy is being pushed by businesses that stand to benefit from the work of creators, while most actual creators are not yet gleaning equal benefits.

Can that be changed? Sure, and the report has several suggestions, including:

The report also points to the potential of Governments to bolster the Creator Economy, with more funding programs to provide stability for creative work. Such programs have become less of a focus in most regions – and either way, that’s separate from the broader focus here, which is how digital platforms, and eventually, the metaverse, can provide support for creators in order to facilitate their work.

Whether that will actually deliver more opportunity is hard to say, because while there are funding programs available, it’s also in the platforms’ interests to promote the most popular content all of the time. That means that Mr. Beast is always going to get more opportunities than an emerging star, and even with expanded monetization opportunities, it’s still very difficult to break through.

Which brings us back to the main point – the Creator Economy isn’t really an economy as yet, at least not an equitable one for the most part.

That is changing over time, granted, as more mechanisms for donations and funding are introduced. But it’s still yet not clear how beneficial such systems can be, overall, in fueling the next generation of creative talent.

You can read the full Rise of the Creator Economy report here.