It's no secret to anyone involved in social media circles that Twitter has a bot problem.

For years, users have complained about the impact of bots and fake accounts on the platform, and while various research reports have pegged Twitter's fake profile levels at between 5% and 15%, their presence is likely more significant than that, with researchers repeatedly pointing to massive swarms of bot accounts being used for malicious purpose - in particular, to amplify certain political messages, and drown out opposing views through mass retweeting.

Twitter's bot issue was highlighted once again this week, with the platform confirming that it had removed 20,000 fake accounts linked to the governments of Serbia, Saudi Arabia, Egypt, Honduras and Indonesia.

Twitter told The Guardian that these accounts "violated company policy and were part of a targeted attempt to undermine the public conversation”.

"Of the accounts removed on Thursday, 8,558 were linked to the Serbian Progressive party (SNS) of Aleksandar Vučić, the president. The accounts had posted more than 43m tweets amplifying positive news coverage of Vučić’s government and attacking his political opponents. Twitter also removed a network of 5,350 accounts linked to the Saudi monarchy operating out of Saudi Arabia, Egypt and the United Arab Emirates. Together they had tweeted 36.5m times praising the Saudi leadership or criticizing Qatar and Turkish activity in Yemen."

This is a key, and common use of Twitter bot networks - earlier this year, a network of Twitter bots was found to be spreading misinformation about the Australian bushfire crisis and amplifying anti-climate change conspiracy theories in opposition to established facts. Those behind that campaign were never identified, nor did Twitter officially acknowledge this reported network. But it further adds to the perception that Twitter is still riddled with bot profiles, which can be mobilized, at any time, to amplify chosen messaging.

And such campaigns can be effective - late last year, a news story about a sick child sleeping on the floor of a Leeds hospital due to bed shortages at the facility went viral after a surge in claims from various Twitter accounts that the image was staged and/or entirely fake.

And those critical tweets bore some significant similarities. 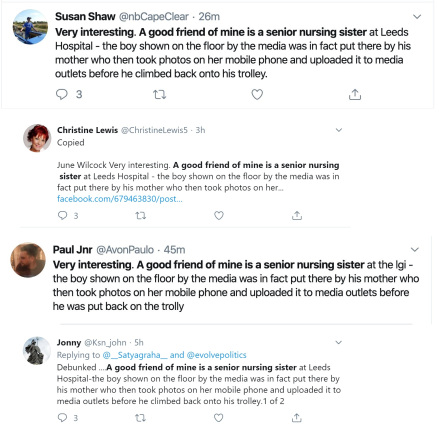 The hospital had confirmed that there was a bed shortage at the time, and that the story was, in fact, correct. But seemingly, a Twitter bot army had been employed to discredit the report, as part of a broader effort to ramp up support for the Tory party ahead of the UK election.

Those criticisms then spread to Facebook, using the exact same language again, and were even shared by some well-known UK celebrities, causing more people to question the report's veracity. And while later investigations indicated that this was indeed a coordinated attempt to twist the truth, the damage was largely already done. The seeds of doubt had been sown, and the story had become another political weapon, which may well have influenced many voters in their eventual decision.

Clearly, Twitter bots can be a problem - and it is also worth noting that Twitter has been working to address the issue, with several solutions reportedly in consideration.

In 2018, as part of its attempts to rid its platform of misinformation, Twitter removed more than 70 million fake accounts, dealing a significant blow to fake profile operators. More recently, Twitter's been working on a new bot labeling system, which would help users better understand which profiles are real people and which are not, while this month, Twitter also announced an update to its Developer API policy which specifically rules that:

"...developers clearly indicate (in their account bio or profile) if they are operating a bot account, what the account is, and who the person behind it is, so it’s easier for everyone on Twitter to know what’s a bot - and what’s not."

So, Twitter now has an official rule in place to call out bots, and eliminate bot networks for those that fail to comply. And this latest bot network discovery shows that it absolutely needs to enforce this, and take action against bots and fake profiles in order to stop mass-manipulation campaigns, and limit their potential influence, especially with respect to political initiatives.

It may well be, too, that the COVID-19 pandemic could play a part in this. Like all platforms, Twitter is working hard to detect and remove coronavirus misinformation, which is a crucial element in the battle against the spread of the virus. People need accurate, timely information and updates, and in its efforts to combat such, maybe Twitter is learning more about the networks behind these campaigns, and how it can refine its systems to better detect them and reduce their impact.

The COVID-19 pandemic has highlighted, more than ever, the key role that social platforms now play in providing information to the public, and with that, maybe we'll see more action taken across the board to eliminate all forms of manipulative behavior, reducing its impacts.

We can only hope that Twitter is able to take more action on such - because while Twitter doesn't have as many users as Facebook, it's still highly influential. Twitter is the real-time news source of choice for many passionate newshounds and community leaders, and they take what they find and share it with their networks everywhere else. As highlighted by the Leeds hospital story, these bot pushes spread, and their influence stretches well beyond Twitter itself.

Even if you don't use Twitter, and you don't feel like such campaigns impact you and your opinions, they likely do, as they eventually trickle through to all corners of the web.

Twitter, of course, has various issues to deal with right now as it works to meet rising demand, while dealing with its own staffing impacts as a result of the COVID-19 lockdowns. But in the wake of this, Twitter needs to take more action to address its bot issues.

Banning political ads on the platform is one thing, but banning bot swarms would likely have a much bigger positive impact in the case of tweets.