While the ship seems to have sailed on Facebook being the top social platform among younger audiences, Facebook, of course, still has Instagram to maintain connection with the youth. Or 'had' - according to a new survey conducted by research firm Piper Sandler, Instagram, too, now seems to be losing ground, with Snapchat and TikTok seeing higher preference among teen users.

The report incorporates responses from over 9,800 US teens, with a virtually even split among male and female respondents. 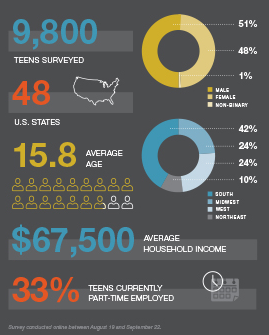 The report looks at several elements, but on favored social media platforms, respondents indicated that:

The results are not overly surprising - similar reports have consistently indicated that Snapchat has maintained its popularity among teen users, despite its smaller overall audience size in comparison to Instagram. But Instagram has also long held its place as the top youth preference. Now TikTok is muscling in - which will no doubt upset Zuck and Co., and disrupt their plans for total social media dominance.

Indeed, reports have indicated that Facebook representatives have been keen to highlight the potential dangers of TikTok to US senators, while The Social Network has also been working to replicate TikTok's key features in an effort to negate the app's popularity. Thus far, none of those measures have necessarily worked - and while TikTok is still embroiled in a controversial takeover push, it remains entirely possible that the app will be able to continue operating, as normal, despite the US Government's ongoing pressure for a sell-off to a US-owned business.

But it's not all bad news for Facebook - according to actual usage data among teen users, not popularity, Instagram remains on top (84%), followed by Snapchat (80%) and TikTok (69%). Which is likely enough to placate Facebook - people can say whatever they want, but if they're opening its apps more often, then the reality is all that matters.

And that's where Facebook could still be winning. While various reports have suggested that engagement with Facebook's main app is declining over time, Facebook itself hasn't reported any official usage stats, in regards to time spent per day, since 2014, when it shared that users were spending 40 minutes per day in the app. In 2016, Facebook additionally reported that users were spending more than 50 minutes a day using Facebook, Instagram and Messenger, but since then, The Social Network has gone quite on in-app usage, which could suggest that the overall amount of time spent hasn't increased since.

But we don't know, Facebook's not saying, and we have no other way of determining actual time spent - though external estimates have suggested that people are now spending around 37 minutes per day in Facebook's main app.

But if teens are still opening Instagram at high rates, that's a win for The Social Network. That could indicate a variance between what teens think is cool and what they actually use, which is an important consideration for similar studies.

So, what does that mean for your marketing efforts?

Going on the data here, if you are looking to reach teen users, then Snapchat, TikTok and Instagram are obviously your three go-to's, but which will be more valuable will largely come down to experimentation and seeing which helps you gain traction with your focus market.

Snapchat is the most popular, but Instagram sees more usage, while TikTok continues to rise. All present significant opportunities, and it will largely come down to your brand and messaging, and which platform is a better fit, based on your approach.

You can read more from the Piper Sandler 'Taking Stock with Teens' survey here.