At 2 billion monthly active users, YouTube is a giant in the online space, and one which cannot be overlooked by digital marketers. Whether you define YouTube as a social media channel or not (the exact definition of which doesn't quite apply), the fact of the matter is that YouTube remains the leader in video content, which is, at present, the most popular format for connecting with audiences.

But just like any channel, if you want to get the most out of YouTube, you have to understand how it works, what people are heading to the platform for, and what users are viewing in the app. To provide more context on this, the team from Pew Research have conducted a new study of some of the most popular YouTube channels, in order to determine what they're posting, how they're posting it, and what content trends are emerging.

Pew's team focused on YouTube channels with at least 250,000 subscribers, and conducted an analysis of all the content this group posted in the first week of 2019. That ended up equating to more than 43,000 video uploads, giving Pew a huge dataset to examine.

Here's what their study found.

First off, Pew found that - as is the case on most platforms - a relatively small number of content creators contribute the majority of uploads.

Pew actually found a similar trend on Twitter - in another study published by Pew earlier this year, it found that the most prolific 10% of Twitter users create 80% of overall tweets.

That, potentially, supports the case for influencer marketing - if a small number of producers are garnering the vast majority of attention, those are the channels you really want to be on. It may cost more to do so, but the data here would suggest that it could lead to better results.

But even with that being the case, the top YouTube creators, overall, are highly active.

"These popular channels alone posted nearly a quarter-million videos in the first seven days of 2019, totaling 48,486 hours of content. To put this figure in context, a single person watching videos for eight hours a day (with no breaks or days off) would need more than 16 years to watch all the content posted by just the most popular channels on the platform during a single week."

There's a lot of content on YouTube, more than anyone could ever watch - and that content is changing viewing habits, which is another key element to consider in your consideration.

According to Pew's report, YouTube videos aimed at children under the age of 13 are highly popular:

"More broadly, videos featuring a child or children who appeared to be under the age of 13 – regardless of whether the video in question was aimed exclusively at children or not – received nearly three times as many views on average as other types of videos." 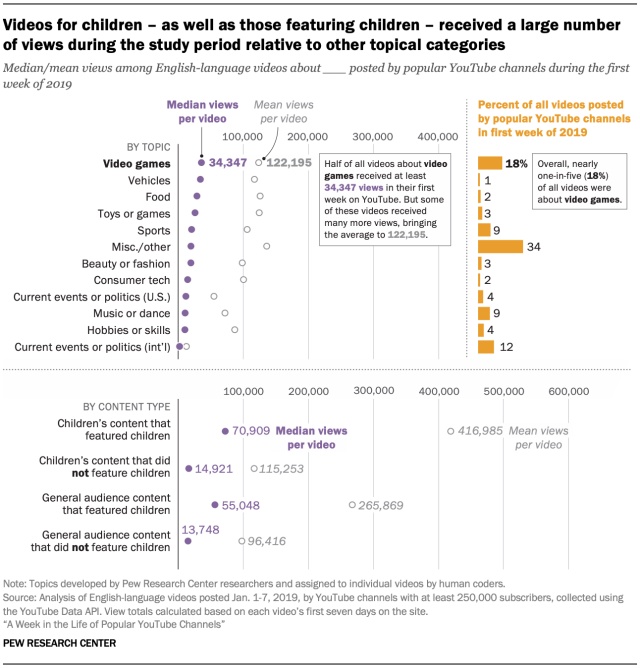 To be clear, Pew does note that the most popular videos were "explicitly intended for children", so it's not the presence of a child that's the driving force. The key note here is that video consumption habits are changing - the next generation of consumers is now far more likely to know who DanTDM is as opposed to a TV cartoon character. If you want a measure of where the future of entertainment is headed, this is a key indicator.

Underlining this further, another recent study found that children in the U.S. and the United Kingdom are now 3x more likely to want to be YouTubers compared to astronauts when they grow up.

The next generation is already, largely, in YouTube's grip.

Among the other key notes from Pew's study:

In terms of associated social media promotion, Pew says that 70% of the studied videos mentioned other social media platforms, such as Instagram or Twitter, within their description (either in links or in the text itself). Interestingly, those videos that did mention another social platform garnered more views than videos that did not, which suggests that viewers may be more inclined to share content which is associated with a broader social presence.

There are some solid insights here, some great notes which can help you develop a more informed YouTube strategy. Many of these notes you've likely suspected, or been aware of in some capacity, but the sample size here lends more credence to the data, and points to key trends which are likely to define the next generation of video consumers.