A new study by Pew Research has once again underlined the ‘dominance of the few’ rule on social media, with the numbers showing that around 25% of Twitter users in the US produce around 97% of all tweets. 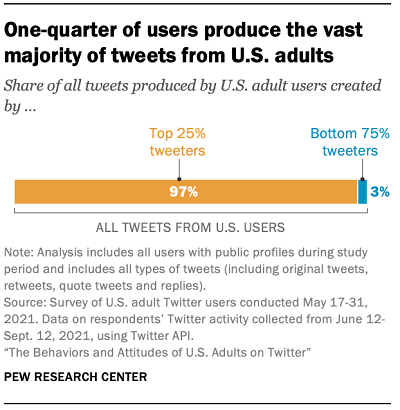 As this chart bluntly illustrates, a small, highly active group of Twitter users dominate the discussion on the platform - which would suggest that getting the right users to share your brand messaging can have a big impact, as only a fraction of Twitter users are actively engaging and posting updates regularly.

Though it is interesting to note the specifics – in the further detail, Pew notes that:

“Although the top 25% of users produced the overwhelming majority of tweets within the study period, original tweets made up just 14% of their posts. By contrast, roughly 80% of tweets from this group are either direct retweets (49%) or replies to other tweets (33%). Replies and retweets similarly make up the majority of posts from less active tweeters as well.”

So 82% of tweets, from all users, are replies and retweets, not original posts, with retweets being the dominant element. That could suggest that there’s not much original thought going around the Twitter-sphere, despite the amount of tweets being shared, while it also points to how the platform is being used to amplify certain elements through re-amplification.

Which is pretty overwhelming, really. 50% of all tweets, based on these stats, are retweets – which makes sense, as that would also include people adding their own comments to those retweets as well (Pew doesn’t specify the use of Quote Tweets here). But it may also indicate that Twitter is not the hive of ideas and discussion that it might seem, with few users sharing anything at all, and when they do, much of that is tied to previous tweets, not entirely original thought.

Really, the data underlines the significance of news sharing and discussion in the app, as opposed to direct interaction, which could indicate the platform’s influence in this respect, in prompting more engagement around news content.

Pew’s study also looked at overall engagement - and if you’re not seeing a heap of retweets and Likes in the in app, this might make you feel a little bit better about your performance. 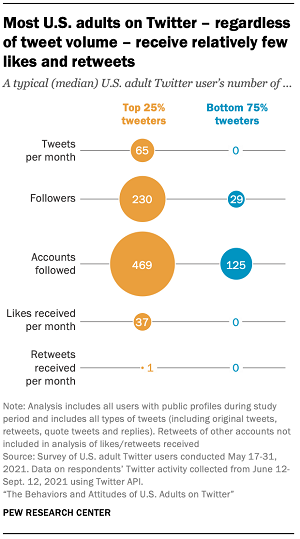 As you can see here, in a typical month, the tweets produced by high-volume tweeters collectively see an average of 37 likes and one retweet.

So it’s not just you – there’s not a lot of tweet engagement going around, in comparison to the amount of tweets.

That seems to have changed over time, with general tweet engagement declining, despite rising activity in the app. Maybe users have gotten over engaging, though they may still be reading tweets – but the bottom line is that you shouldn’t be overly discouraged by lower tweet engagement, because that’s what everyone sees.

Still, it does feel a little problematic. Going on these numbers, the most prolific Twitter users are sharing a lot of retweets, that see very little engagement. Could those figures be influenced by bots re-amplifying specific tweets and/or movements?

Another element that Pew’s latest tweet study looked at is privacy settings, and user understanding of private and public tweets.

“Among users who volunteered their profiles for research purposes, 65% said their account is public, 19% said their account is private and the remaining 17% said they’re not sure. But in actuality, a direct examination of the privacy settings of these users’ accounts revealed that the vast majority (89%) of U.S. adults on Twitter have public accounts that are visible to anyone visiting the site. Put differently, 83% of Twitter users who say their accounts are private or who are not sure of their privacy settings actually have public accounts.”

That seems like a problem, and another reminder of the gaps in digital literacy, which could be a part of broader concerns relating to misinformation, angst and other negative impacts of social media interaction.

If people don’t even understand how their privacy settings work, how can they be expected to understand algorithmic amplification, and the potential impact that it can have on the content that they see?

In this sense, while privacy options are one key element, the bigger issue this highlights is that many people simply don’t understand some of the key aspects of digital interaction, which could have far more significant consequences for information dissemination and engagement.

There are some interesting notes in the study, which also looks at how Twitter users engage with news content, and how that impacts their perception of the latest information and shifts. If you’re looking to get a better understanding of how Twitter, and social media more broadly, is influencing broader discourse, it’s worth taking a look.

You can read the full ‘Behaviors and Attitudes of U.S. Adults on Twitter’ report here.