While Facebook has copped a lot of flack for copying Snapchat's Stories feature, people don't often note that Facebook's own features have also been copied pretty extensively.

Case in point, Facebook's 'Reactions' emoji response tools, which it launched back in 2016, have since been copied by LinkedIn, tested by Twitter, and are now being repurposed within Pinterest.

The above is an example of one of Pinterest's new tools for its group boards, which are designed to increase engagement and interaction within the collaborative option.

In addition to this, users will also soon be able to sort Pins within group boards by reactions and comments, along with the time that each was Pinned.

Pinterest has been slowly evolving its group boards option, adding in new features to make the tool more engaging, and maximize time spent within the planning option. Last year, for example, Pinterest added commenting tools within group boards to facilitate more active interaction, and now, Pinterest is looking to take that a step further, with a dedicated chat option within group collections. 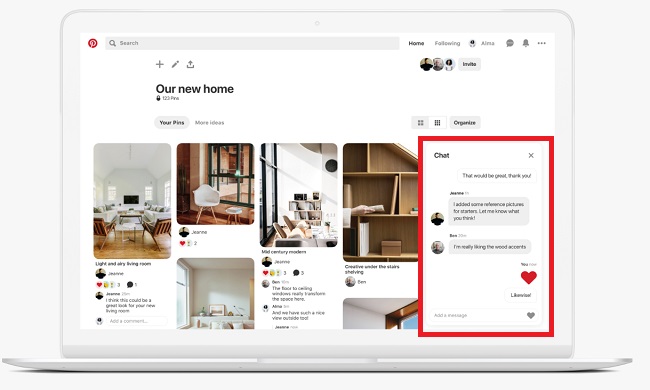 It's sort of a step back to Pinterest's social platform roots, which it's been trying to shake off for years. Originally, Pinterest was more focused on connection and engagement within its boards, showing off the things that interest you in order to connect with other, likeminded folk. But its since moved further and further towards product discovery and eCommerce, leaving those social elements by the wayside as it went.

Through group boards, Pinterest is at least holding the candle of social engagement - though it is clearly focused on event planning and product discussion, so it's still more aligned with eCommerce than it is with direct engagement and display.

In fact, part of the motivation for these additions is because group boards tend to be small - Pinterest says that 98% of Group Boards have five or less people contributing, and 77% of Group Boards are between two people. As such, these tools are not about broad social connection, but about facilitating product engagement.

It's an interesting platform within which to add a tool like reactions, but it makes sense. And maybe, if it proves popular, we'll see Reactions filter out to other parts of the app in future, expanding the replication of one of Facebook's key features.

Pinterest's reactions and sorting tools for group boards are available within the latest version of the app, while group board chat will be rolled out "within the coming weeks".