In the lead-up to a likely IPO later in the year, Pinterest has this week announced that four new regions will now be able to utilize Pinterest ads, with Germany, Austria, Spain and Italy now being added into the mix.

"This newest expansion means that Pinterest Ads are now available in four new European countries, in addition to existing markets in the US, UK, Canada, France, Ireland, Australia, and New Zealand."

That means that Pinterest still has a lot of potential for expansion - and worth noting, Pinterest's revenue last year was $700 million, more than double what the company generated in 2017. This new expansion will help it capitalize on further opportunities, while Pinterest also notes that it'll be looking to extend its ads to businesses in the Netherlands, Belgium, Portugal and Switzerland as well within the coming months.

To support the expansion of its ads program, Pinterest is also building new sales teams in Germany, Spain and Italy, along with regional teams in Germany, France and Ireland, which give it capacity to assist businesses in all European regions.

It's a logical move for Pinterest, and as noted, it'll extend the platform's revenue opportunities further, and strengthen its case for investment as it moves closer to a public listing.

As we've noted previously, while Pinterest can't compete with other social platforms on overall audience size, Pinterest is actually not trying to - instead, Pinterest is re-framing itself, not as a social network, but as a discovery and eCommerce engine. Along this line, Pinterest's entire focus has shifted to product listings, and highlighting more relevant item matches for users, which has seen the platform become a key connection tool for many of its members.

Fewer active users is obviously not as appealing to advertisers, but as noted in the 2017 Mary Meeker report, what Pinterest does drive better than others is shopping intent. 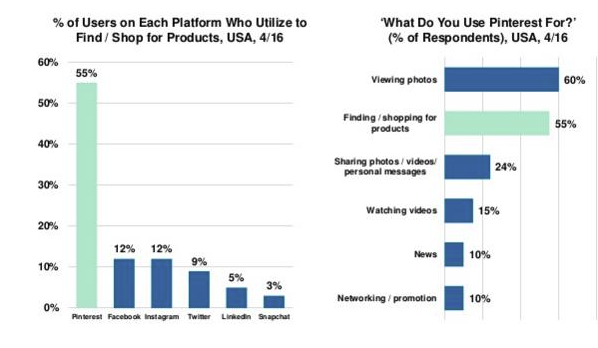 If you're reaching far fewer users, then overall audience size is a big issue - but if each of those users is spending a lot more money as a result...

This is where Pinterest can boost opportunity, and where brands will be paying attention, which is why the expansion of its ad options into new regions is so significant. It'll be interesting to see what further data we might get on this if and when the company decides to announce its public offering.