Pinterest has announced the launch of version 5 of the Pinterest API, which enables developers to build separate applications to facilitate Pin presentation, creation and management, and will now be open to all developers, as opposed to being limited to selected partners.

“The Pinterest API (v5) is the single API for developers to build applications and solutions for merchants, advertisers, creators and Pinners to drive results on Pinterest. Developers who have been waiting years to get API access, are now able to without revenue minimums. We are actively reviewing all requests to access the Pinterest API, and developers may be approved as quickly as 1 business day.”

The new API includes Shopping, Content and Analytics elements, which will enable all new functionality within third-party apps and tools, providing more ways to manage and maintain your Pin presence. 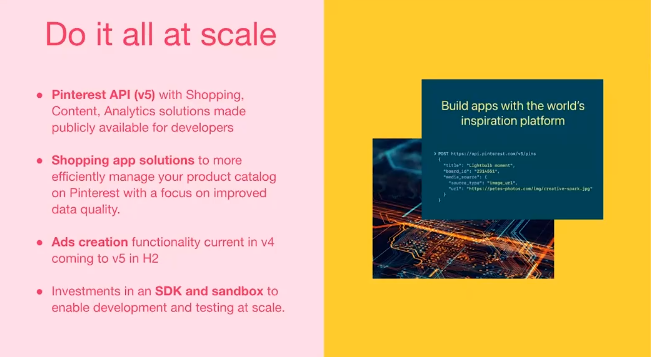 The new API will also enable developers to utilize the Pinterest taste graph, which includes ‘more than 330 billion projects, places and products’, which could see all new data insights tools and apps emerge.

The API essentially facilities new use cases for these elements, like on-site widgets and Pin management tools, which could provide new ways to both showcase and interact with Pin content outside of the app itself. So while it won’t directly impact regular users, the expanded API may lead to new tools that can help you get more value out of the platform.