Pinterest has launched a new virtual test drive ad experience with Volkswagen, which could also introduce a new, engaging ad option for auto brands on the platform.

As part of the campaign for the new Volkswagen ID.4 electric SUV, Volkswagen is running a new, interactive, in-car experience, which can be activated from its Promoted Pin. 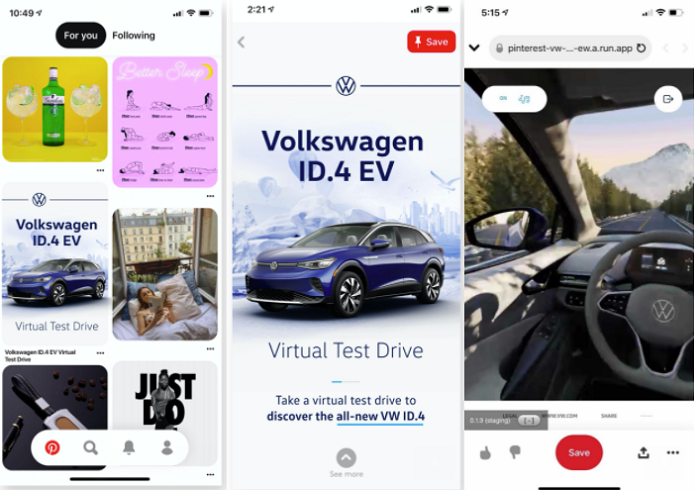 Tap on the 'See More' prompt at the bottom of the Pin and you'll be taken to a 360, interactive view, enabling you to look around inside the car as it drives.

It's a first-of-its-kind integration for Pinterest, which leans into immersive, AR-like experiences, which will eventually become commonplace in all forms of eCommerce and online product discovery. In addition to this, Pinterest will further the promotion by partnering with selected Pinterest Creators who will walk consumers through their personal favorite features of the car, boosting exposure and connection in the app.

It's an interesting development for Pinterest on two fronts. First, and as noted, the promotion leans into enhanced virtual experiences, which will increasingly become a part of online shopping as platforms look to merge in-store and online buying wherever they can. eCommerce is not the same as being able to touch and feel - or test drive - a product yourself, and it never will be, but with new advances in AR and VR, we could be getting close, in many ways. And as these tools evolve, that will become the expectation over time.

It's also interesting to note that Pinterest is looking to facilitate commercial arrangements with creators, providing paid promotional opportunities to platform influencers. Every social app is trying to find the best ways to provide monetization opportunities for their top creators, in order to keep them aligned to their platforms, and this could be another way for Pinterest to develop its own program to help its top stars generate additional income from their presence.

And while it may seem a little out of place for auto brands to be looking to Pinterest for such promotions, the stats show that Pinners are actually increasingly looking to research cars in the app.

According to Pinterest, 8 million Pinners are actively engaging with auto content every month, while and 1 in 3 Pinterest users 'become inspired to shop for cars they weren’t even looking for' via Pins. Previous Pinterest research has also shown that Pinners are 28% more likely than non-Pinners to buy a new vehicle within the first 90 days of a release, while they're also 31% more likely to buy a new SUV model after a new release.

In addition to this, Pinners are also 55% more likely to be concerned about their personal carbon footprint than people who aren’t on the platform.

The numbers highlight the broadening use case for Pinterest, in reaching specific markets and audiences, even those you may not have considered. It may well be worth giving the platform another look for your campaigns.