After seeing an increase in chat activity in its app during the COVID-19 lockdowns, Reddit is this week launching a new 'Start Chatting' option within subreddits, which will enable users to initiate an enclosed group discussion of up to five members at a time from that same community.

"This past month, as people around the world have been at home under various shelter-in-place restrictions, redditors have been using chat at phenomenal new levels. Whether it’s about topics related to COVID-19, local news, or just their favorite games and hobbies, people all around the world are looking for others to talk to. Since Reddit is in a unique position to help in this situation, we’ve created a new tool that makes it easier to find other people who want to talk about the same things you do."

As you can see from the above image, now, when you're browsing a subreddit, you'll be able to tap on the 'Start Chatting' button to initiate a group chat. Reddit's system will then seek to connect you with "like-minded users looking for deeper engagement on subjects relevant to a community". 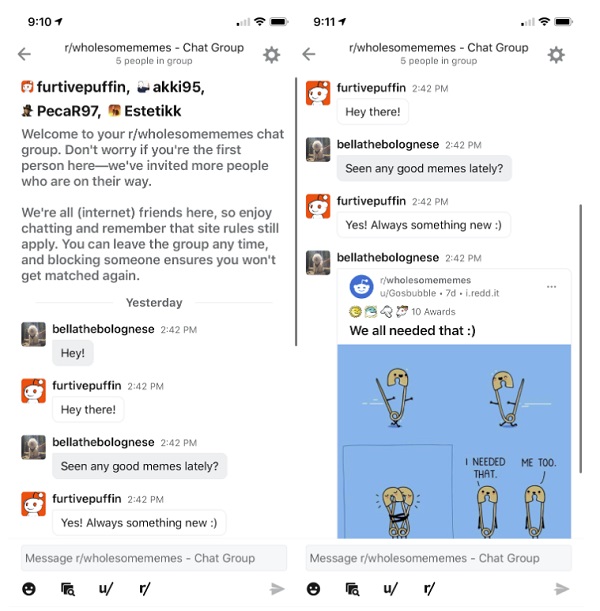 Given the increase in discussion on Reddit, the feature makes sense. Reddit says that chat usage via its existing 'Rooms' and 'Direct' options within the app has increased by 80% since late January, when the COVID-19 lockdowns were first implemented. That said, the somewhat random nature of the 'Start Chatting' option seems a little concerning. I mean, sure, you'll be matched with people who are visiting the same subreddit, so they'll likely share a similar interest, but chatting with randoms - and Reddit randoms specifically - could lead to some interesting exchanges.

Reddit has also outlined a range of security tips and controls for users, so at least you can block and report people, and ensure that you're never matched with them again if there's a problem. But still, it could be an element to keep an eye on.

If it works as intended, however, it could be great for facilitating connections between new people via aligned interests - and given that the majority of people who'll be looking to chat in a subreddit will likely be more passionate, dedicated members (I browse Reddit regularly and I've never felt any inclination to chat with anyone), it could be a good introductory tool, which could further strengthen the links within Reddit's various communities.

It'll be an interesting experiment, if nothing else. In testing, Reddit says that its seen users "discussing cliffhangers from the latest episode in our TV show communities, or finding others to game with online".

You can read more about Reddit's new chat options here.

UPDATE (4/30): Reddit has now rolled back this feature after various errors. Reddit plans to redeploy the option at a later date.