After live-streaming piqued user interest with the arrival of the now-defunct Meerkat back in 2015, the functionality has gone on to become a mainstay of the social networking experience, with live-streaming capacity now available on Facebook, YouTube, Twitter, Instagram, LinkedIn and Snapchat, along with dedicated live-stream apps.

And now, Reddit is looking to get in on the live-streaming action - though it's doing so in its own, unique way. 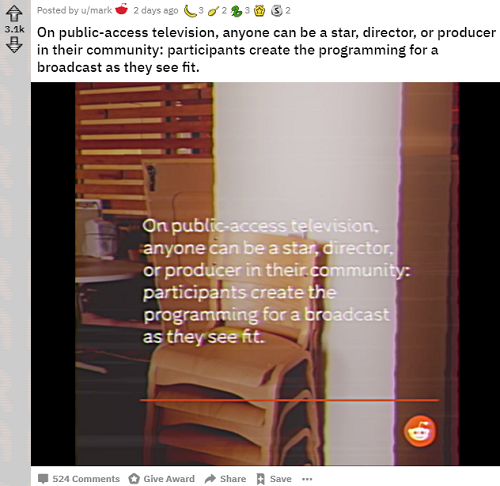 The series of posts have ended up being the precursor to what Reddit's labeling its version of the Public Access Network (PAN), which will enable Redditors to broadcast, in real-time, on a dedicated PAN channel.

"Starting today until 5PM PT, and from 9AM-5PM PT through Friday, redditors around the world will be able to create live broadcasts. In true Reddit fashion, voting will determine the top broadcast, and you can explore different broadcasts by swiping or clicking right or left. As you move further from the top broadcast, the broadcasts you see will be increasingly more random, so we encourage you to explore and vote."

Reddit's live-streaming interface looks like a stripped-down version of those offered on other channels, with voting, share options and a collapsible chat window.

Reddit says the option to broadcast is coming to all users this week, but it's rolling out in stages, so some users will have it before others.

The addition makes sense, from a functional standpoint, but it also seems destined for controversy, with Reddit being more open to questionable content, and welcoming of related discussion.

Reddit has long sought to distance itself from editorial interference in what users discuss on the platform, with no ID requirements and profiles being optional on the network. Over time, and as it has sought to build its ad business, Reddit has gradually been forced to take action against more concerning elements within its community, but it's still very easy to come across disturbing, graphic and/or illegal content in the app.

That raises some concern about a Reddit live-streaming option - which is why Reddit, at least in this initial test, is looking to implement strict rules around what's not acceptable for live-stream broadcast:

According to Wired, Reddit's PAN broadcasts will be "tightly curated, with no more than 100 concurrent streams that run for no longer than 30 minutes each". Reddit has also created a new policy document covering what's acceptable on Reddit Live.

As outlined above, the initial r/pan experiment will run for a week, giving users a glimpse at Reddit live-streaming, and providing Reddit with insight into what it will need to do to stay on top of content issues. Wired notes that this initial project is likely a precursor to full live-streaming capacity coming to all Redditors in a few months, which, again, will be a controversial addition.

Will Redditors be able to restain themselves and play by the set rules, or will it only be a matter of time till there's a major controversy surrounding Reddit streaming?

And from a business perspective, will it help increase usage and provide a new avenue for Reddit growth, or will it become a concern for marketers looking to connect with users through Reddits ad options?

You can check out r/pan in the above listed times to get a feel for what the option is all about.