Shopify has announced a new integration with Facebook which will enable Shopify users to purchase items via its 'Shopify Pay' payment system when buying in Facebook and Instagram Shops.

"We’re expanding Shop Pay - the fastest and most secure way to shop online - to all Shopify merchants selling on Facebook and Instagram. With Shop Pay now available as a fast and secure payment option on Facebook, people also get access to industry-leading order tracking and carbon offsets from their deliveries."

Similar to Amazon's One-Click purchase process, Shop Pay is an accelerated checkout solution, which enables Shopify customers to save their email address, credit card, and shipping and billing information in the app so that they can complete their transactions faster whenever they're directed to the Shopify checkout. Shopify Pay already sees significant usage, facilitating more than 137 million orders in 2020.

Given this, the integration with Facebook and Instagram shops could be a major advancement for Facebook's eCommerce push, providing more ways for users to revert to a transaction process that they trust when buying through its platforms.

That's a big consideration for The Social Network right now. As we saw with the recent backlash over WhatsApp's proposed data-sharing update, the company doesn't have the best reputation on the storage and usage of consumer data these days. As such, there may be some hesitancy among consumers to use Facebook Pay, its own payment option that it's continuing to roll out - but by providing alternate, trusted payment systems to facilitate purchases in-stream, that could see a lot more shopping activity occurring within its apps. 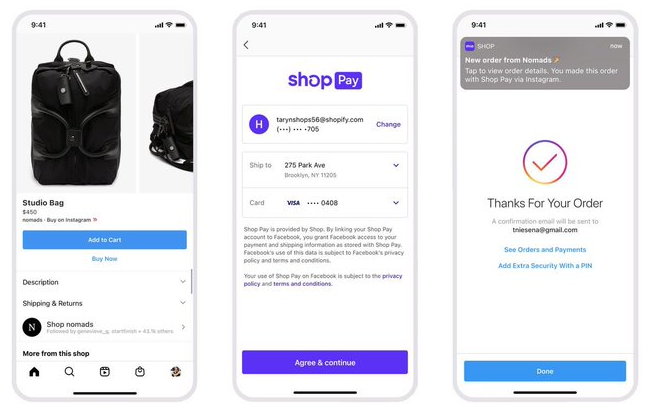 As you can see in this sequence above, the new process will add Shopify Pay as a payment option in the check-out process on Facebook.

What's more, it could become a lure for more retailers to create their Facebook and Insta shops - according to Shopify, checkout on Shop Pay is 70% faster than a typical checkout, while it also sees a 1.72x higher conversion rate.

"For merchants, this means fewer abandoned carts and increased conversion. For consumers, this means a one-click checkout that remembers and encrypts their important details including billing and shipping information, leading to more time shopping and less time filling out forms."

eCommerce is the next big stage for Facebook, which data suggests could be slowly losing its importance among certain user groups, with daily active usage declining in the US. By incorporating shopping behavior, Facebook is looking to tap into the rising reliance on in-home shopping, accelerated by the pandemic, as a means to expand its utility, while in-app transactions could also play a crucial role in the platform's expansion into new regions.

On Instagram, eCommerce serves an entirely different purpose, given the higher degree of product discovery that happens within that app. In that sense, making it easier to go from browsing to buying could also make shopping a much more habitual behavior, which could change the way people use the app.

The opportunities on both fronts are significant, and adding more payment options - especially established, trusted processes - could prove to be a major step.