What's your view on automation? While many see it as running counter to the ethos of what social media and digital connection is all about (i.e. facilitating more personal connection), for brands looking to scale their online activity, a level of automation is likely inevitable. And with ongoing developments in AI, and machine-powered systems learning how to undertake certain processes better than humans ever could, it seems inevitable that automation is coming. At some stage, like it or not, your business will need to consider automating certain elements.

But is that a really a foregone conclusion? And even though you can automate certain aspects of your marketing processes, does that mean you should?

To get a better handle on the broader industry sentiment around automation – and what processes are acceptable to automate (versus those that are not) – we put out the call to our SMT community for their thoughts on where they see things headed. More than 300 people responded to our ‘State of Automation’ survey, giving us a range of perspectives and insights for our first major report of 2019 - 'The State of Marketing Automation'.

This week, we'll highlight some of the key findings from the report from SMT, but you can read the full report at any time at this link.

Part I: Current State of Automation

As noted, many marketers still have significant concerns about automation – especially given the wider industry push to incorporate more human connection and personalization in order to improve response.

In reality, both of these shifts can go hand-in-hand when used the right way, but a delicate balance is required. No one wants to receive generic marketing emails addressed to ‘Dear [insert name here]’, and responses to retargeting will be mixed, especially if your behavioral matching is too broad.

So, what’s the overall industry stance on automation and what is acceptable to automate?

The first question we asked in our State of Automation survey is ‘Does your business currently use automation tools?’ To which, a whopping 75% responded that they do. 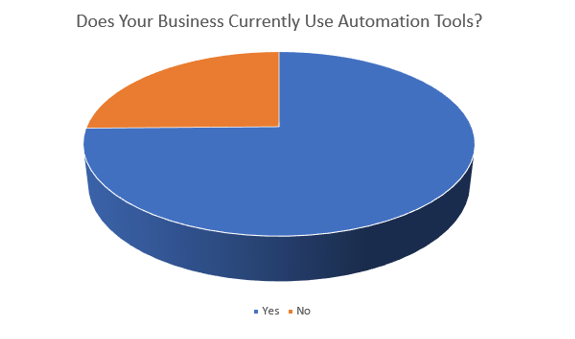 So, automation tools are already accepted, at least to some degree, by most marketers - but more importantly, what do businesses see as marketing processes which can be viably automated?

According to our survey, social media post scheduling, email marketing (including audience targeting and the use of templated messages) and social media advertising (retargeting) are the top three processes which can be safely automated without reducing overall effectiveness or audience connection. 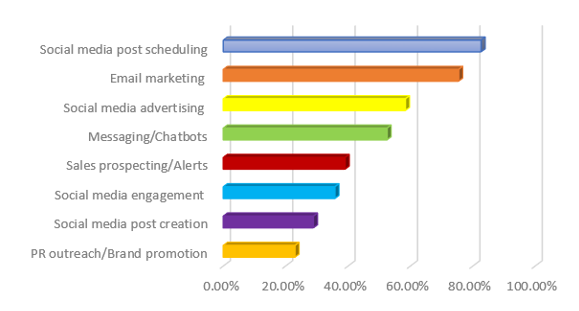 Most social media managers would no doubt agree that post scheduling is acceptable – especially those who manage multiple accounts. The capability to analyze your audience behaviors, and target your posting based on when they’re active online, is a solid bet, and a sensible use of basic automation processes.

But even then, you want to be responsive too – you want to be proactive enough to be able to engage to people who react to your scheduled content. Even at this basic level of automation, there are additional considerations to keep in mind – it won’t entirely be a ‘set it and forget it’ option for most.

Email marketing automation, based on audience segmentation and user behavior triggers, is also a commonly used, and largely beneficial option – but as noted, it can backfire if not implemented the right way. The key lies in effective audience segmentation – there’s no point, for example, sending a follow-up listing of offers for new cars to people who’ve just purchased a new vehicle, and are not likely to be in the market again for some time. The extra step of filtering your email contacts into specific groupings can have a big impact in this regard, ensuring your automated processes generate optimal response. The more focused the better.

Social ad retargeting also makes perfect sense, tapping into that initial interest – which can be particularly effective with the use of targeted offers.

But it is interesting to note, based on these responses, that automation is already so widely accepted. Not for everything, not for every element, but it is already being taken in for those aspects that brands feel safe with. That could suggest that all aspects of automation will eventually see broader adoption as the industry gets up to speed on each application – chatbots, for example, which came in at fourth on our list, are likely less of a priority at this stage because they’re not seeing widespread consumer use, but many brands which are utilizing them are seeing good response.

Will that mean we see greater brand adoption as more use cases come to light?

The less accepted forms of automation noted here relate to systems which seek to replicate human engagement or activity. The bottom three processes – social media engagement, social post creation and PR outreach – are all processes which most would suggest require a human touch, a personal element to make them feel genuine.

But will attitudes change as automation gets better? Is there a limit on what’s possible if AI can evolve to the point where it’s able to accurately simulate personal response? There’s likely not, but the use cases we’ve seen thus far would suggest that these types of elements are a little too advanced for AI to replicate just yet.

Worth noting too – in another element of our study, we asked respondents who are using some level of automation whether those automated processes have been effective for them. A full 66% of respondents indicated that such tools have been either ‘moderately’ or ‘very’ effective, underlining the expanding potential.

You can download the full SMT 'State of Marketing Automation 2019' survey data and report here.