We've been waiting for Snapchat to respond after Instagram launched Stories, and now we may have seen just what their counter-punch will be, with the first look at their long-awaited smart glasses project, called Spectacles.

But not only that, Snapchat's also re-branded as Snap.inc, reflective of their broadening product scope, not that they're moving into wearables also.

And interestingly, Snap Inc. describes itself as a camera company, not a social networking app. 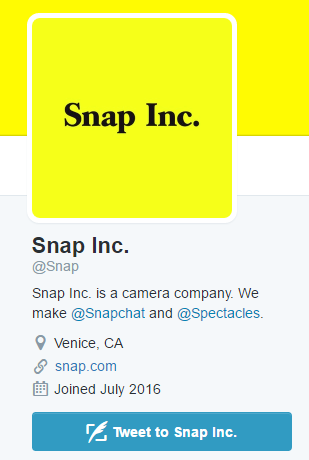 But back to Spectacles - as you can see in the video, Spectacles enable the wearer to capture their perspective without having to take out their phone and film the moment - in speaking to The Wall Street Journal, Snap Inc. CEO Evan Spiegel describes this as being "like a wall in front of your face", taking you away from the moment.

And capturing the moment is what Spectacles is all about - Spiegel, again talking to WSJ, described one of the first times he wore the glasses, on vacation with fiancé Miranda Kerr, in particularly passionate overtures.

"It was our first vacation, and we went to Big Sur for a day or two. We were walking through the woods, stepping over logs, looking up at the beautiful trees. And when I got the footage back and watched it, I could see my own memory, through my own eyes. It was unbelievable. It's one thing to see images of an experience you had, but it's another thing to have an experience of the experience. It was the closest I'd ever come to feeling like I was there again."

Capturing and sharing the moment is also what Facebook aspires to achieve - in a recent Q and A session, CEO Mark Zuckerberg described a similar feeling, though he pointed to VR being that next level of shared experience.

The comparison between the two approaches is interesting, given that much of the speculation around Snapchat's smart glasses project has centered on augmented reality elements, which don't appear to be evident in this first incarnation of the device.

In terms of specific functionality, Spectacles can record up to 10 seconds of video at a time, with the wearer pushing a button on the side of the frame to activate video capture. The glasses are connected to your phone via WiFi or Bluetooth, so you can upload your content in the moment.

Note the "Specs" storage option within Memories in the screenshot

But what's particularly interesting about the process is that Spectacles captures footage using a 115 degree angle lens, which resembles the human eye's field of vision.

What does that mean in practice?

Here's what @Spectacles means by "circular video". Such a simple well-executed idea. pic.twitter.com/NGZ8GTy1CP

Spiegel had another interesting line on this, comparing the more common rectangular approach to video as being more akin to the past - "an unnecessary vestige of printing photos on sheets of paper". It's reminiscent of Spiegel's stance on vertical viewing, and that seemed to pay off pretty well.

When the wearer turns their Spectacles on to record, the camera will light up, letting the subject know they're on camera.

Spectacles will initially come in three different colors - black, teal or coral, and look much more stylish that Google Glass (which was one of the reasons that device reportedly never gained traction).

Spectacles will be priced at $129.99 (est. £100, AU$170) and will be available in limited distribution, with Snap Inc looking to get a feel for the consumer response before considering their next move.

It's a bold move from Snapchat - an expected one, given the speculation, but a bold one nonetheless. Will it pay off? Will people find use and functionality in Spectacles? Certainly, the initial response online has been positive, with a flood of tweets about the new product.

And they do look good - it's a fairly safe bet that Spectacles will be the must-have tech gadget on release, and that momentum might just be enough to keep users on Snapchat, as opposed to drifting off to Instagram Stories. Over time, this has been Snapchat's strength, the platforms innate understanding of their audience and user experience, which has enabled them to continually release new and innovative features that keep people coming back. And just when it looked like Instagram might stunt the app's momentum, maybe, through Spectacles, Snapchat might have found a way to keep their foot on the gas.

And this is before you even consider the additional Lenses and filters that users might be able to place over their Spectacles video content to further boost the offering.

We won't know till we have our hands on them, till the first user feedback comes in, but they look good, the presentation's great, the pitch speaks direct to Snapchat's audience. Now to wait and see if Zuck and Co look to strike back.