With Snapchat's AR Lens ads driving significant engagement and interaction in the app, the platform is now looking to open up the option to more brands, with a simplified AR Lens campaign option that enables businesses to build custom Lenses based on pre-made templates and/or Snap's library of 3D objects. 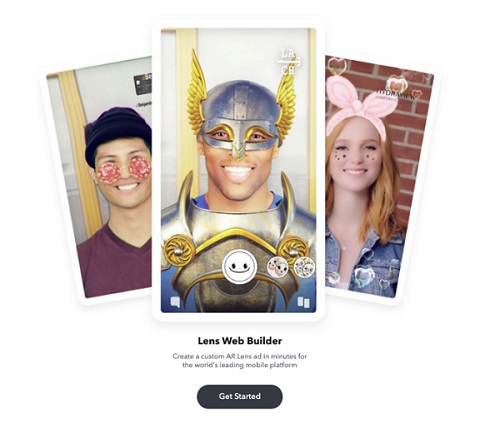 Called 'Lens Web Builder', the new process enables you to create your own lens campaign within "a few minutes".

"You can choose from a library of hundreds of 3D objects, animations, and effects to build your own custom branded AR Lens. You can also upload your own 2D assets (such as logos and images) to further customize the AR experience. Once you're finished, you can select your Lenses in the Creative Library of Ads Manager when launching campaigns."

Snapchat says that there are no additional fees to access its repository of 3D assets, but daily minimum campaign spend requirements apply to AR Lens campaigns.

Given the popularity of Snap's Lenses, it could be a popular option. According to Snapchat’s data, more than 70 million people access its AR Lenses every day, and they use the tools for an average of three minutes per session. That’s a lot of engagement - and you only have to look to the viral baby and gender swap Snap Lenses from last year to get some idea of the potential viral boost that can come with an effective Lens campaign.

Of course, using pre-made templates and objects is a lot less likely to spark that type of mass-engagement - but then again, the simple 'which character are you?' filters that have taken hold on Instagram are fairly basic, and don't require a heap of in-depth platform knowledge to create.

Maybe you could spark the next big Lens trend with your own campaign.

You can learn more about Snap's Lens Web Builder here.