With Instagram become the social place to be, more and more creators and brands are working to build their Insta audiences, and maximize the reach of their posts.

Are you looking to grow your Instagram audience in 2020?

Of course you are, everyone is, but the problem that many have found is that building a large following on Instagram isn't as easy as it is (or was) on Facebook and Twitter. Now, users are more wary about cluttering their feeds, and less open to adding everyone they meet.

But there may still be a way to fast-track your Insta following. No, not buying followers (don't do that), but creating your own viral AR effects for Instagram Stories. And doing so could actually be simpler than you'd expect.

You may have noticed a rash of Instagram Stories posts of late which have been using the 'Which Disney Character Are You?' or '2020 Predictions' effect.

WOW the last two days have been crazy. Thanks to everyone who used the filter. You can find an updated version of it on my profile ???? Stay tuned for the next ones ???? So what will you be in 2020? Ps. Yes, I've misspelled fabulous ahaha gonna make up for that

These (relatively) simple AR additions, created in Facebook's Spark AR Studio, have seen a significant boost of late, with a heap of celebrities jumping on-board and trying out the features.

That's then lead to these visual additions essentially going viral - but in order to use these community-created Stories additions, users have to go to each individual creators' profile, and swipe across to the listing of their created effects. They can then tap on the 'Try it' button to check it out for themself. 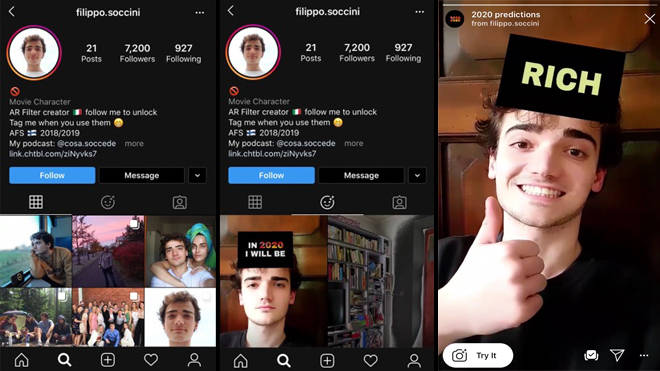 The screenshots above are from the profile of '2020 Predictions' creator Filippo Soccini, and as you can see here, a week ago, before Soccini's effect went truly viral, he had just over 7k followers. He now has over 100k. Through the popularity of this one effect, Soccini has built a huge Instagram audience, fast.

Arno Partissimo, the creator of the 'Which Disney Character Are You?' effect, has experienced an even bigger jump, adding some 620k new followers as a result of the effect's popularity. And given the momentum these users have seen, it likely won't take long before brands are jumping on board, and adding their own, or influencer-created effects to help them boost their followings, and maximize attention in the app.

In some ways, the popularity of these tools seems obvious - quizzes and articles like 'Which 90s TV show Character Are You?' have been hugely popular on Facebook for years. There just hasn't been an equivalent format for Instagram, and the quick, interactive, fun approach taken by these simple, visual additions makes them easily accessible, within the fastest growing sharing format in the app, in Instagram Stories.

And anyone can make them. Well, anyone with the technical nous and patience to learn how to use Facebook's Spark AR Studio. But the platforms are working to make such tools easier to use, in order to get more people adding to their AR offerings, and benefiting from the subsequent engagement that popular tools like these can bring to their apps.

So it's not necessarily a simple path to Insta-fame, but depending on how much you want to build your audience, and how much faith you have in your idea for an effect, it could be worth the effort. Again, Arno Partissimo went from 6k to 630k followers as a result of his effects.

The next risk to consider here is that Instagram could quickly be inundated by 'Which character are you?' type features as a result of this new trend, but again, if you have a good idea, it could be still cut through.

It won't be for everyone, but given the numbers, it may be something to consider.

NOTE: If you're interested in learning how you can actually make your own AR effect of this type, Robert Martin of Kapwing recently put together this video tutorial of the full process: