Over the past few years, Snapchat has been working to get its young user base more involved in the political process, through voting awareness stickers, polling location tracking, voter registration pushes, Discover programming and more.

And now, Snap’s looking to take the next step in civic engagement, by prompting its users to actually become politicians, and directly influence political shifts. 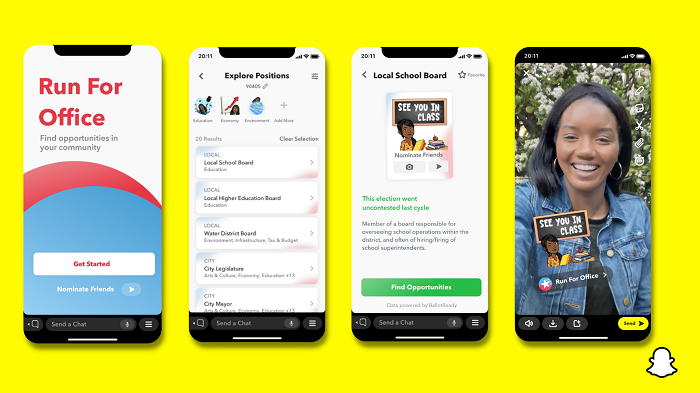 “Our new Run for Office Mini is designed to help Snapchatters engage with democracy in an easy, native-to-mobile way. Powered with information from BallotReady, this simple tool will help Snapchatters explore hundreds of opportunities to run for local office based on the issues they care most about - from City Neighborhood Board and Township Council to School Board and State Representative.”

As you can see in the above screenshots, the ‘Run for Office’ mini provides a range of key insights into local political positions, as well as explainers on the steps that people need to take in order to nominate themselves for relevant local ballots and positions.

The mini will also include info on filing deadlines and signature requirements, and provide contact information for local election offices.

“In addition, Snapchatters will be able to share stickers from this portal to start campaigning on Snapchat with their closest friends.”

Which is important, because according to Snap:

“Snapchatters say that friends were more than five times more influential in their decision to vote in the 2020 election vs. influencers and celebrities.”

It’s an interesting push from Snap, which could help to boost civic participation at a key time, with political movements gaining more focus, and momentum, and people of all ages now having more options for engaging with the issues of most relevance to them.

Right now, US politics, in particular, is dominated by older representatives, with only 6% of US state legislators being under the age of 35. Which makes some sense – politics, ideally, should involve some level of life experience. Yet, at the same time, you also need the input of younger generations to ensure the most equitable, beneficial outcomes are being met, and that all people have a voice, and a platform to be heard in the highest levels of government.

Snapchat’s already contributing to political shifts, with research showing that Snap directly inspired hundreds of thousands of people to head to the polls in 2020. And with reach to some 90% of 13-24 year olds in the US, it can definitely increase, and enhance that effort.

Young people are more engaged in societal issues than ever before, and they’re keen to have a say. Maybe, this will provide a clearer pathway as to how the next leaders can take the political stage.

Snapchatters in the US can access the new ‘Run for Office’ mini by opening Snapchat and swiping down on the camera screen to access Snap’s in-app games, where the mini will be listed, or you can search ‘Run for Office’ within Snapchat.