Snapchat's Planning to Release Another New Version of Spectacles

Snapchat's ad business is getting on the right track, but the company's not yet on a path to profitability. Meanwhile, the app is still hugely popular with younger users, but its daily active user rate is actually in slow decline.

This is where Snap Inc. sits as a company - for every positive, there's a 'but' attached, a proviso which may unravel everything. That makes it a risky bet - what Snap really needs now is another big product or feature, another significant launch that'll push it over the edge and put it on a clear path to success, ideally, one that doesn't have Facebook standing in its way.

Spectacles could be that avenue.

Yes, it's true that Spectacles haven't been a hit thus far - Snap reportedly lost almost $40 million on unsold pairs of its original version of Spectacles, with hundreds of thousands of pairs left sitting in warehouses unsold. Yes, it's also true that Snap's subsequent Spectacles variations - the latest version being launched just weeks ago - haven't exactly been huge either. But the fact that Snap is sticking with them suggests there still may be more to the device than we've yet seen. And that could still be a significant factor, if Snap is able to get it right.

The latest news on the Spectacles front is that Snap's planning to launch yet another variation of the device, this time with a new design, a stronger, aluminum frame - and importantly, two cameras.

As explained by Cheddar:

"By utilizing two cameras, the Snapchat app will be able to overlay AR lenses and create 3D-like photo effects from footage taken by the Spectacles. The new hardware is intended to further CEO Evan Spiegel’s grand vision of eventually creating eyewear technology that seamlessly overlays virtual objects onto the real world."

To be clear, this new variation would not enable users to overlay AR objects onto their real-world view through the glasses yet, but it would be another step in that direction.

The new version, according to Cheddar, would cost around $350, more than double the price of the first iteration of Spectacles, though Snap is also planning to produce far fewer of them initially, in order to gauge demand (and avoid the same losses incurred from the first gen).

As we've noted previously, layering AR over your real-world view, Google Glass-style, has always seemed to be the path forward for Spectacles, it always appeared to be part of the bigger plan for the device. But making that a reality is hard - Facebook, which is also working on its own version of AR-enabled glasses, has said previously that we’re still five to seven years away from being able to build a fully integrated AR-enabled device that people will want to use.

If Facebook, with all its vast resources, is still that far off making such a reality, then logically, the much smaller Snap Inc. must also be in the same boat, if not worse - but then again, Snap has been able to hit above its weight in the innovation stakes for some time.

Could it be possible that Snap could beat Facebook to the punch, and launch a full-integrated, cooler version of AR-enabled glasses which sees mass adoption?

It's not impossible, at least in theory, and an important element to note here is also where Snap could get assistance in this regard.

Earlier this month, Chinese social media giant Tencent released its own version of smart glasses, which look very much like Snap's Spectacles. 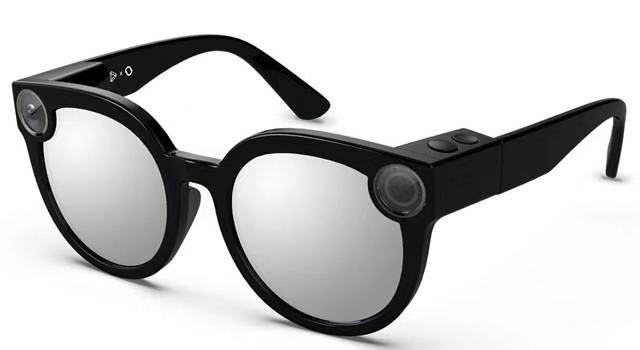 Tencent is actually an investor in Snap Inc., and has sought to partner with Spiegel and Co. on future developments in the past (though those overtures have reportedly been rejected). The most important consideration here is that Tencent is huge - it owns the largest social media apps in China, and its market cap has even exceeded Facebook's at times.

If Snapchat were to actually be working with Tencent - which, given the similarities in the devices, seems likely - then Snap's development of new versions of Spectacles would not be limited by the company's own capacity, nor even to western markets. Tencent owned WeChat has more than a billion users, which gives it a huge testing pool, and potential market for such tools.

If Tencent saw potential in AR-enabled glasses, and worked with Snap on the same, that could be significant. It may also be why we're seeing Snap continue to push forward with Spectacles, even though it seems that that's a path to failure.

Of course, no one outside of Snap Inc. knows the future plan here, no one knows what Snap is up to and where they might be in the development process for Spectacles' ultimate vision. But given the projections, Snap needs something, it needs more than just an improved ads process and the potential revenue that could generate.

And that's especially true if it keeps losing active users. Snap is doing okay, it is improving as a business, it remains popular. But it needs another thing to give it that next push.

Don't dismiss Spectacles as, potentially, that 'thing' just yet.