Snapchat's working on a new way to share music within Snaps, which could be seen as another nod towards the rising popularity of TikTok, though there are some variances in application. 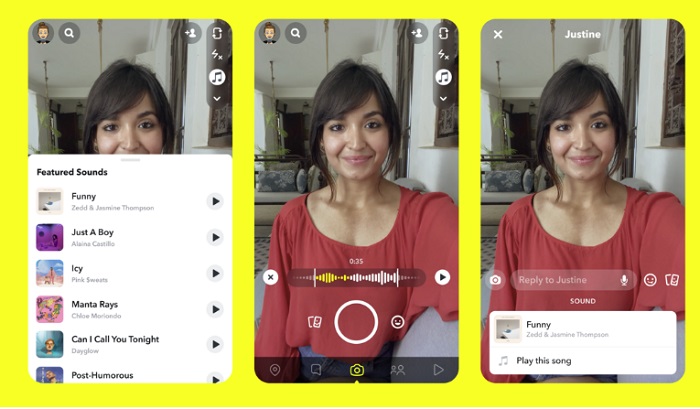 As you can see in this sequence, the new option will enable users to add music to their snaps - pre or post capture. That could facilitate the type of lip-synching, dance clips that have been popularized by TikTok, so it probably is inspired by the app, but the feature has also been facilitated by Snapchat's new deals with music publishers, which will enable it to include more music for use in the app.

Snapchat had been negotiating with music publishers over the last year on new deals to allow for music sharing within Snaps - while Facebook has also been working on new arrangements to ensure it could allow the use of official music clips. As such, Snap would have been planning this type of feature for some time, so it feels like it's not entirely 'inspired' by TikTok. But then again, Snapchat's also testing out a new, Tik-Tok-style, vertical feed format for Discover, so it's clearly looking to riff on the app's success either way.

Maybe, then, music clips will provide a bridge for Snapchat to welcome TikTok refugees across, amid talks of a possible ban on TikTok in the US. That ban looks less likely now, with the Trump administration allowing Microsoft to negotiate a potential buy-out of the app, but still, many TikTok creators will, at the least, be looking to diversify their presence in order to protect themselves from any further action.

And maybe, with music clips, Snapchat will be a more logical destination.

When music clips are added to Snaps, viewers will be able to swipe up on the Snap to view album art, song title, and name of the artist. Viewers will also be able to listen to the full song on their favorite streaming platforms, providing a direct link back to the artists' presence.

And worth noting - Snapchat does already have a music sticker option, linked to Spotify, but this is a more advanced, direct connection option for music clips.

Snapchat will first launch the option in New Zealand and Australia this week, with a wider rollout planned for later in the year.

It could be an interesting addition to your Snap process - though it will be interesting to see if Snap's Discover feed starts to resemble TikTok more as a result.