While TikTok's future may be a little murky due to ongoing investigations into its processes, its influence on the social media landscape is undeniable.

Already, we've seen Facebook roll out new, TikTok-like apps and features, Instagram's added a new function which it has admitted is its effort to fend off competition from TikTok, while YouTube is also testing out a new, short-form-set-to-music format to combat the trend. Even Byte, which is now welcoming TikTok users into its fold as they seek to diversify their online presence, is adding TikTok-style features to cater to usage trends.

And now, Snapchat also appears to be jumping aboard the TikTok replication train.

As you can see in this image, posted by user @artb2668 (and shared by Matt Navarra), Snapchat's experimenting with a new, vertical swipe UX for Discover content, similar to TikTok's swipe-up functionality. 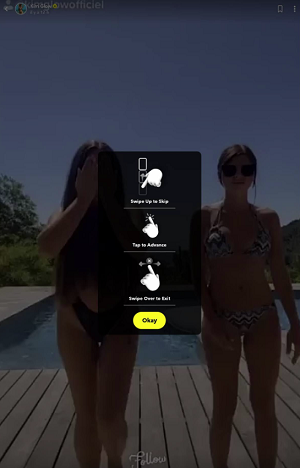 Snapchat's even included instructions on-screen for how to use the option - here's a closer look a the detail.

Snapchat has confirmed the test to TechCrunch, noting that "a very small percentage of its user base" currently has access to the feature.

It's only for Discover content, not for Stories sent to you by friends, and as noted in the above instructions, users in the test still need to tap through on each Story to advance (as opposed to TikTok which doesn't have separate Story frames). But you swipe up to move through to the next Story, and swipe across to exit the Discover feed.

It's an interesting experiment, which, as noted, once again underlines the significance of TikTok's impact. Of course, every major new functionality eventually gets copied - Facebook pioneered the News Feed, Snapchat is the originator of Stories, etc. Everything that catches on will, at some stage, be replicated, but the momentum with which TikTok has stamped itself on the market is significant, showing that there is still room for innovation beyond the major platforms.

Facebook, too, knows this - which is why its experimental NPE team is busy launching and shutting down new apps every other week, as it looks to tap into the next big trend before someone else stumbles across it. Thus far, those experiments don't appear to have yielded any significant findings, but maybe, by testing out everything, Facebook will be able to quell rising apps before they gain traction, helping to keep its place atop the social heap.

In TikTok's case, it may be also the buzzards circling, looking for ways to pick off users uncertain about the app's future.

After India banned the app last month, Facebook quickly rolled out Instagram's 'Reels' functionality in the region in order to usher new users across, while US President Donald Trump's recent comments that America could also look to block the app, as part of China's punishment for COVID-19, lead to a surge in downloads for alternate tools. It seems logical that those apps would look to add in TikTok-style tools to lure more of those migrating users in.

Now, with TikTok facing more questions, more of its top creators are, at the least, diversifying their presence in order to safeguard themselves. And as such, Snapchat's test of duplicate functionality also makes sense.

There's no word on what Snapchat might be looking to do with the test, or if/when it could see a broader roll out. But it's another interesting indicator to watch amid the ongoing rise, and re-assessment, of TikTok.