TikTok has added another way to assist people impacted by COVID-19 with a new set of donation stickers, which will enable users to raise both awareness and funds for charitable causes via their TikTok clips. 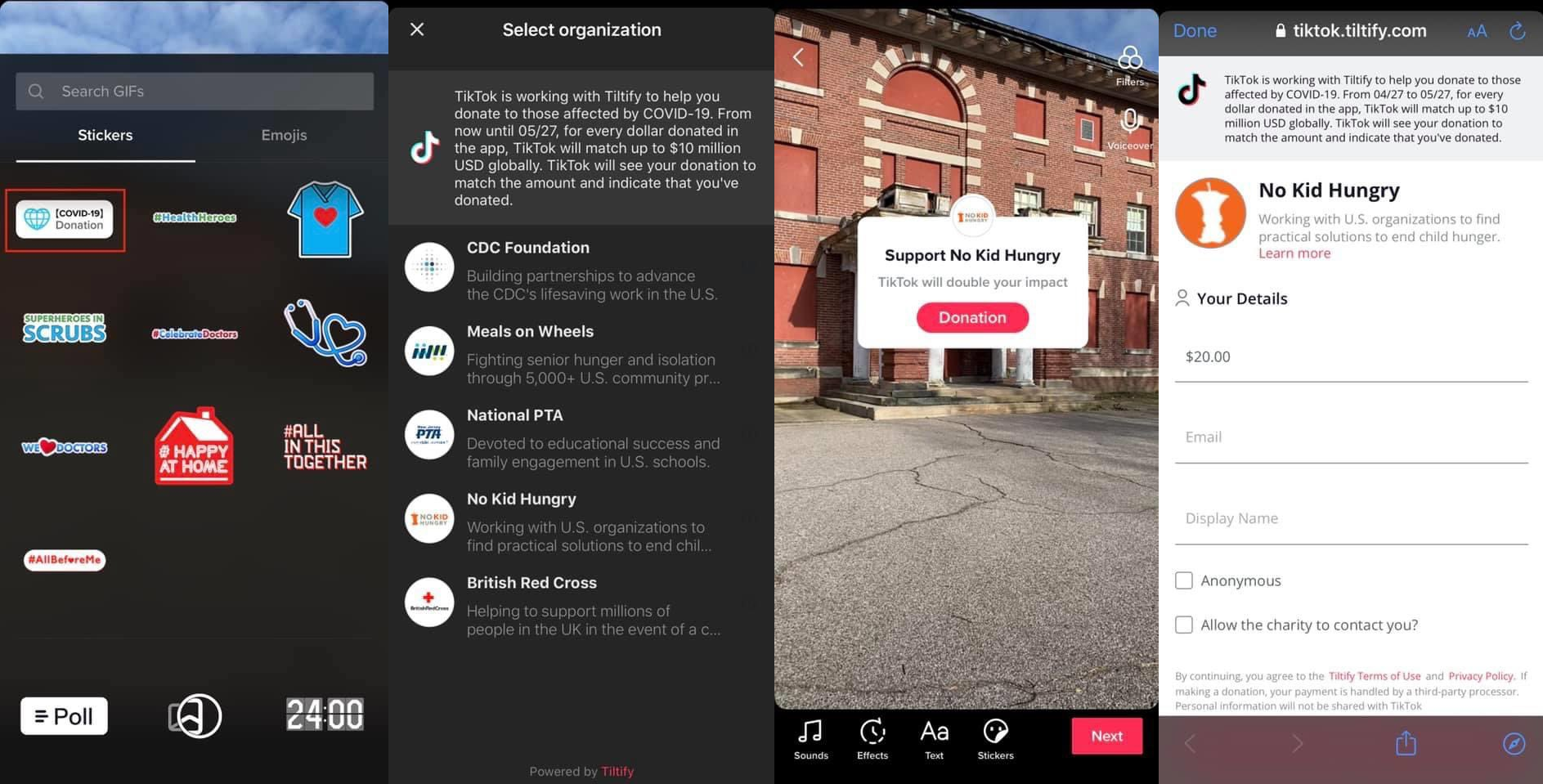 As you can see from these screenshots, posted by social media expert Matt Navarra, the new donation sticker will enable users to select from a range of causes to support.

"Donation Stickers are interactive and can be embedded directly in videos and TikTok LIVE streams, just like other creative effects in TikTok. When a user taps on the Donation Sticker, they will be guided to a pop-up window where they can quickly and easily submit a donation without having to leave the app. Donations are enabled by Tiltify, a charitable fundraising platform, which processes donation transactions securely through their platform."

The option is very similar to the same available on Facebook and Instagram, with Instagram also recently launching a revised version of its donation sticker to assist SMBs impacted by COVID-19.  TikTok's donation sticker was first spotted by user Sam Schmir a week or so back, but has now been officially announced, and is being rolled out, initially, in the US.

And TikTok's also adding a little extra incentive to get people using the option.

"To kickstart our launch of Donation Stickers, we’ve partnered with organizations whose missions support vulnerable groups that are reflective of some of TikTok's thriving communities yet have been deeply impacted by the health and economic damage caused by the pandemic. And to further support these impacted communities, TikTok will be matching user donations made through the Donation Stickers until May 27. The hashtag #doubleyourimpact will automatically be added to videos and TikTok LIVE streams that use the stickers."

TikTok will match up to $10 million in total donations through the Donation Stickers over their first month, adding to the more than $385 million the company has already committed to assistance work amid the COVID-19 outbreak.

And it's not stopping there - in a separate initiative TikTok has also announced a $4 million donation to be separated between No Kid Hungry and Meals on Wheels, which will help to provide food to kids and families in need during the pandemic. The funding will come from TikTok's Community Relief Fund, which is part of its already announced measures, so it's not adding to the above-mentioned $385 million in pledges. But it will see direct funding going to these critical groups, looking to care for those impacted by COVID-19.

And to give its charitable initiatives a further boost, TikTok's also running a series of celebrity-fronted live-streams this week, via its 'Happy At Home' initiative, which will aim to raise further funds for charities.

TikTok has seen a big jump in usage during the lockdowns, and it's keen to use its increased spotlight to showcase its community good initiatives, and build better connection with its user community, in order to help shake off some of the negative associations of the past - to its moderation policies, links to the Chinese government, data tracking, etc. To its credit, TikTok is working hard to underline the separation of its operations from its Chinese parent company, and it's also added a US-based Content Advisory Council to help it improve its policies.

Parent company Bytedance has a major opportunity to capitalize on TikTok's popularity in western markets, but it knows that, in order to do this, it will need to establish trust, which will necessitate greater separation of its processes for specific markets. Which is possible, of course, but it remains to be seen how deep its ties to the Chinese Government actually run, and what authority Chinese officials could have over such.

Initiatives like this, however, will go a way towards raising both awareness and standing in these regions. TikTok still has a lot of work to do, but its push to play a part in supporting charitable causes will only help to bolster support, and usage, during the pandemic.