TikTok was the Most Downloaded App in 2020, According to New Data from App Annie

In what will come as little surprise, TikTok was the most downloaded app of 2020, according to the latest App Annie download charts for 2020, which look at comparative, year-on-year performance for apps on both iOS and Android. 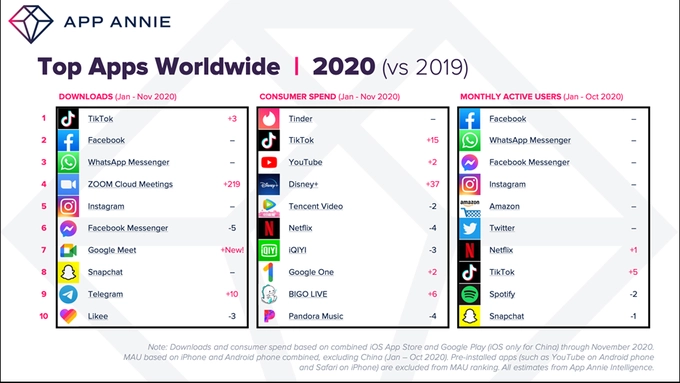 As you can see here, included within App Annie's 2020 mobile app report, they've listed the top ten apps of the year in terms of 'Total downloads', 'Consumer spend' and 'Monthly active users'. The information is based on App Annie's data tracking, which is not as reliable as official users counts posted by the companies themselves, but it is indicative enough to provide an overview of comparative performance in the market.

As you can see, both TikTok and Zoom have seen signficant increases in download activity in 2020 - with Zoom rising 219 spots on the downloads chart. Telegram has also moved up ten spots, while Messenger slipped five places in comparison to last year.

Along with Zoom, we also have Google Meet, which Google has been pushing as an alternative to the video conferencing app. It's also notable that Likee remains in the top 10, despite not being as widely known as the other apps in the list. The Singaporean video app was looking to make a bigger push in the US market earlier this year, but appears to have changed its plans as a result of COVID-19.

TikTok has also seen a big jump in consumer spend versus last year. TikTok has significant opportunities for monetization, and it's working to integrate more eCommerce tools and options to help ensure it capitalizes on that potential, and provide a means for creators to make money from their clips. Unsurprisingly, streaming services also saw a big jump in consumer spend in 2020, as people looked for entertainment options while locked up in their homes.

But Facebook, overall, maintains its social app dominance. As you can see in the 'Monthly active users' listing, the top four apps are all Facebook-owned, though TikTok has seen the biggest jump in the top ten. Facebook's market dominance is still unchallenged, and while Facebook's apps don't appear in the consumer spend chart, that's only because it's a year-on-year comparison, not overall numbers.

TikTok is growing, but it has a long way to go before it's in a position to challenge Zuckerberg's massive social empire.

There's a heap more app performance data in the full report from App Annie, which you can download here (with email sign-up). If you're looking to get a better understanding of app usage trends, it's definitely worth a look.