Twitter has taken another step towards reducing the impact of trolls and abuse by acquiring Smyte, a company founded by former Facebook, Instagram and Google team members who specialize in webspam, fraud and digital security. 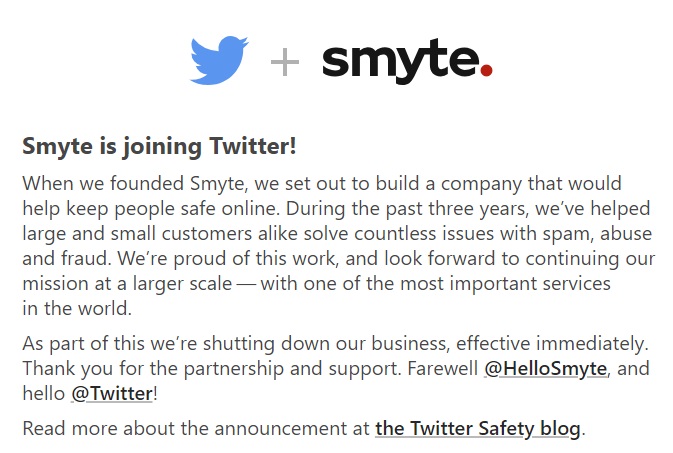 As noted by Smyte, the company will now look to help Twitter resolve its various issues, with Smyte’s technology able to better detect bad actors, and remove them before they have any impact.

And Twitter still has a lot of issues to deal with on this front – while the platform has been taking measures to eliminate trolls and abuse, there are still regular stories of people quitting the platform to avoid such concerns.

One of the more recent, high profile cases saw Stranger Things actor Millie Bobbie-Brown, who is just 14, delete her verified Twitter account in order to disassociate herself with a slew of homophobic messages which had used her image.

While eliminating all such cases will always be difficult - if not impossible - Smyte’s technology will better enable Twitter to tackle such problems, and address them in a more active way.

Another key area where Smyte might help is bots. While Facebook has copped the brunt of criticism in regards to how its platform was used to spread misleading content in the lead-up to the 2016 US Presidential Election, Twitter was also a weapon of choice for activist groups, with armies of bots amplifying selected messages, and potentially influencing opinion.

Twitter has been taking action on this front – as noted by Followerwonk, Twitter has been deleting suspicious accounts at a higher rate than ever before, and has implemented new measures to reduce their impact. But still, there are a lot of bots on the platform.

A report from last year estimated that fake profiles make up around 15% of the platform’s total user count, while UK researchers have uncovered various huge, inter-connected Twitter bot networks - the largest incorporating some 500,000 fake accounts.

Such misuses hurt Twitter’s core offerings – if people can’t trust that the users they ‘reach’ on the platform are actual people, why would they invest more money in Twitter ads?

And then there’s the fake follower problem - The New York Times published an article in January which highlighted that many celebrities and social media experts have been purchasing followers to artificially inflate their stats, a particular concern for influencer marketing.

Smyte, of course, is not the solution to all of these issues, but the acquisition does underline that Twitter is actively working to fix its problems. Worth noting too, as pointed out by TechCrunch, the acquisition is Twitter’s first since buying mobile startup Yes, Inc. back in December 2016.

It’s not a solution, it’s not likely to change Twitter overnight. But it is another step in the right direction.