After first launching its Stories-like 'Fleets' option to users in Brazil back in March, Twitter is now expanding the test to users in Italy as it continues to gather feedback about the tool. 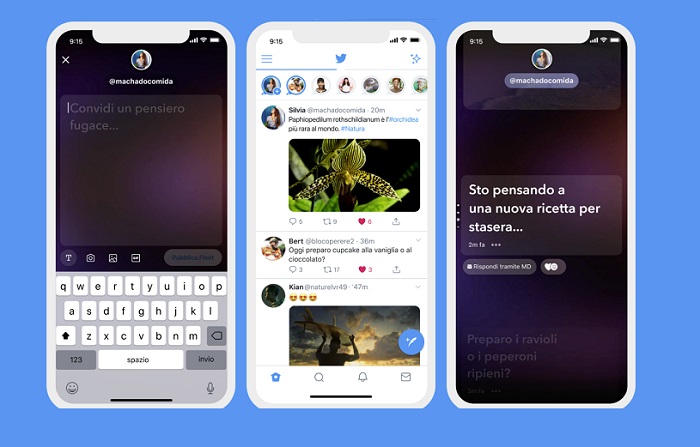 Fleets, as you can see in these images, are pretty much exactly like Stories, with a new panel of rounded profile icons at the top of your Twitter home feed which, when tapped, connect you through to full-screen posts that disappear after 24 hours.

Though Twitter hasn't specifically said that Stories are the inspiration - according to Twitter's head of product Kayvon Beykpour, Fleets grew from the fact that people regularly say that they don’t feel comfortable Tweeting:

"...because Tweets can be seen and replied to by anybody, feel permanent and performative (how many Likes & Retweets will this get?)."

Twitter's also sought to address the first point with the launch of its new test of audience controls on each tweet. And now, Fleets is getting an expanded look, which will help Twitter refine and improve the product ahead of a full rollout.

So what's Twitter learned from the use of Fleets thus far?

Twitter's team has shared these initial observations and notes:

I mean, those aren't overly insightful pointers, they're largely what you'd expect. But still, a potential reduction in abuse is a significant point of note, even within a small sample set, and that could point to it being a valuable tool to address the concerns noted by Beykpour above.

Twitter says that it likes what it's seeing on Fleets in Brazil, but it still has more to learn and update "before deciding if Fleets should come to everyone on Twitter".

So it may not ever get a full release. But it probably will.

LinkedIn is also slowly rolling out its own take on Stories in the same way, with LinkedIn Stories now available to users in Brazil and the Netherlands. So you could soon have an influx of Stories across your various social media feeds - which, according to usage stats, is what people increasingly want. But the combined introduction of new Stories options could have a significant impact on consumption habits, very quickly.

Worth noting in your strategic planning.