Direct messaging has been on the rise of late, with the growth of apps like Facebook Messenger, WhatsApp and Snapchat leading the way. Twitter too has seen more interest in their messaging options - the number of Direct Messages sent on the platform grew over 60% in 2015, while the number of tweets shared privately rose 200% in the second half of last year alone. Of course, part of that is no doubt attributed to the extension of DMs, which was implemented last August - increasing the character limit has clearly lead to a resurgence in DMs and their utility.

As you can see above, now, when you want to share a tweet via DM, you can just click on the message icon at the bottom and be taken direct to the DM function. It streamlines the process of sharing tweets privately, making it easier to connect and continue your private conversations around the latest tweets and topics.

While the functionality itself is not new - users have been able to share tweets via DM since 2014 - the streamlined system makes it easier to link people to more direct communications, which could have applications for brands looking to facilitate better connections with customers via tweet. 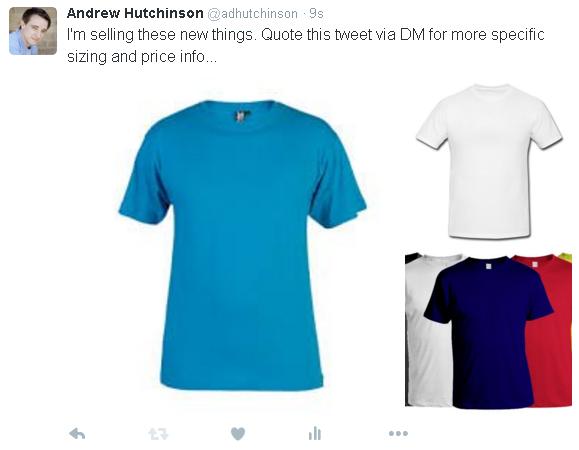 By using the new tweet/DM option, it'll be easier for prospective customers to connect and have all the relevant information included within a single message thread, including the originating tweet that sparked their interest.

It's not a major move, granted, but it's another step that shows Twitter's working to make better use of DMs. Last week, there was a report on re/code which suggested that Twitter might be considering splitting off DMs into their own app to compete with the rising tide of messenger use. This came after news that Facebook's partnered with airline KLM to enable passengers to access flight details - even their boarding pass - via Messenger, and amid reports that Facebook may be working on a Messenger 'bot store' to give businesses a way to customize their own Messenger bots to respond to customer queries and reduce human workload. In fact, another messaging app, Kik, unveiled its own variation of a bot store today, underlining the rising emphasis on customer service automation via message. Many see the development of messenger bots as a major step forward for eCommerce, and a major opportunity for messaging apps, one that could usurp Twitter's position as the best platform for immediate response to customer service queries.

Twitter's very keen to hold onto that crown, so it makes sense to see the platform looking to emphasize direct messages and bolster their DM offering with new options to keep up with advances from other providers. Whether that extends to Twitter breaking out DMs into their own app remains to be seen, but it's safe to assume that Twitter's looking into it and considering every option to fend off the rising competition in this space.

Twitter's new Message button will be available today on Twitter for iOS and Android - you'll need to update to the latest version to get access to the function.