Twitter is launching a new push to get more people to participate in the 2020 US Presidential Election, including a prominent, top of timeline prompt that will be displayed to all users in the US when they log in today. 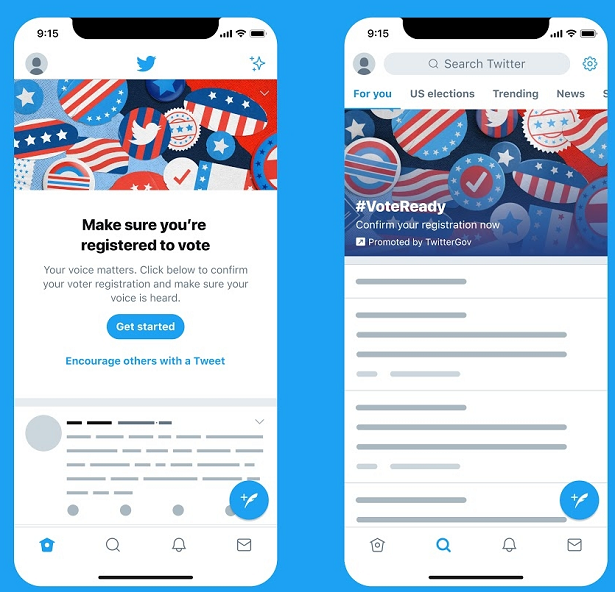 "In partnership with National Voter Registration Day, Twitter is making its biggest push ever to encourage people to register to vote and confirm their registration status. Today, we’re rolling out new tools and in-app experiences that will put voter registration resources at the public's fingertips and support the essential voter registration efforts happening across the country."

As you can see in the above screenshots, the new voter notifications will be displayed on the main Twitter home screen and in the Explore tab, ensuring all users are made aware of their voting options.

In addition to this, today, Twitter will also prompt users with push alerts to encourage voter registration, while it's also adding two new 'hashflag' emojis for #NationalVoterRegistrationDay and #VoteReady "to empower civic conversation across the country".

These new elements are tied specifically into National Voter Registration Day, but they also add to Twitter's ongoing efforts to encourage broader civic participation, and maximize both awareness and transparency around the 2020 Election.

For example, Twitter's added badges on candidate profiles to highlight their tweets, and clarify who's saying what (and why) on the platform.

Twitter's also expanded its policies around election misinformation and the voting process - which has even seen it add warning labels to tweets from US President Donald Trump, underlining the seriousness of its push in this respect.

Twitter has also stopped accepting paid political ads, and has added a range of other measures and tools in order to play its role in securing the integrity of the US Election process, and ensure its platform is not being used to manipulate voters.

Still, there are areas of concern. Various reports have suggested that armies of Twitter bots are still being used to amplify political messaging, and sow division among voters. A recent report also found that one conservative youth group had been paying teenagers in Arizona "to flood social media with pro-Trump messages".

There are still ways that Twitter can play a negative role in the election process, but for its part, Twitter is looking to add more tools to combat voter manipulation - particularly in relation to the voting process - and get more people to the polls in 2020.

Combine this with Facebook's new voting participation push and it should see more people encouraged to the poll via social platform usage.