You've seen it in testing, and now it's here, with Twitter officially launching its new 'Twitter Blue' subscription service, which will enable users to pay a monthly fee to gain access to a range of additional tweet features and tools.

"We’ve heard from the people that use Twitter a lot, and we mean a lot, that we don’t always build power features that meet their needs. We took this feedback to heart, and are developing and iterating upon a solution that will give the people who use Twitter the most what they are looking for: access to exclusive features and perks that will take their experience on Twitter to the next level."

Those tools, in this initial offering, are: 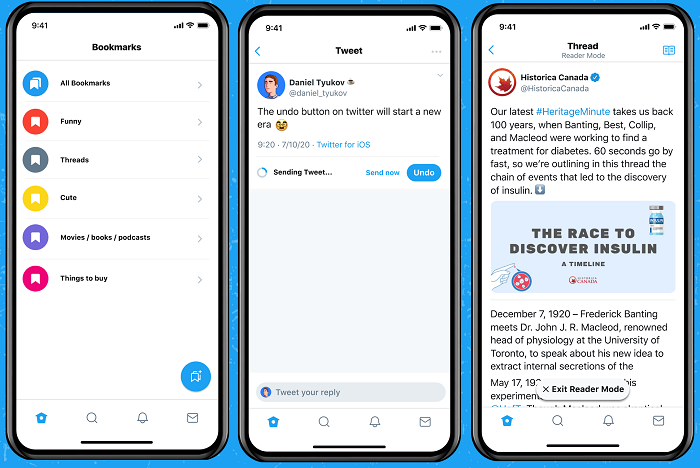 You can see the new 'Bookmark Folders', 'Undo Tweets' and 'Reader Mode' options here, which provides some perspective on how, exactly, these tools might be used.

There are some interesting options here - maybe not ground-breaking, and really, not surprising, given that they've been widely reported via early leaks. But this is what the initial Twitter Blue offering will be.

Twitter Blue will first be made available to users in Canada and Australia, and priced at $3.49 CAD/$4.49 AUD, respectively. Twitter plans to gather feedback from this initial test pool, before making the option available to more regions.

"And for those wondering, no, a free Twitter is not going away, and never will. This subscription offering is simply meant to add enhanced and complementary features to the already existing Twitter experience for those who want it."

So there'll be no change to Twitter as you know it, just some additional tools for people to buy in to, if they choose.

And some users will pay. While there's been some skepticism, and criticism, around Twitter's move into paid features, especially given that they're not major, 'edit tweets' type options that would immediately justify the extra cost. While these initial features may not be must-have add-ons, a lot of Twitter users will likely be willing to shell out a few bucks a month just for a new color scheme, or to test out the 'undo tweets' option and see how it works.

One less coffee per month would give you access to a few new features. It could be worth it, and I'm telling you now, many users will sign on as soon as they're able to access these advanced tools.

And Twitter doesn't need a heap of subscribers to make the project worth its while. As we've noted previously, even if only 1% of Twitter users sign-up and pledge that monthly fee, that would still equate to around $7 million per month (+$21m per quarter) in direct revenue for the company, straight up. It's easy to see then, how this could quickly become a hugely profitable addition, and a massive earner for the company, which is aiming to significantly boost its revenue run rate over the next few years.

And it likely isn't done there - other reports have suggested that Twitter will also look to variable tiers of subscriber tools, that might cost more, and offer other features. Businesses might eventually be able to sign up for 'Twitter Green', for example, at, say, $9.99 per month, which would give them exclusive new tools, like maybe new in-app icons, improved analytics features, or even general access to Twitter's in-development business profiles.

If Twitter started charging for these, again, brands will sign-on, and you only need to look at the above equation to get some scope as to the impact that could have on the company's bottom line.

So, if you don't like these features, if you think Twitter's taking a big swing and a miss, if there's no way you'd ever pay for these tools. Cool. Don't. But the broader logic here is sound, and this could end up being a big earner for the company.