Last month, Twitter rolled out its new and improved desktop experience to all users, the culmination of a whole scale re-build of Twitter.com which aims to better align it with the mobile app.

Change is never wholly well-received, especially on social platforms, and there have been various gripes and issues raised, but overall, most of the feedback seems to be largely positive.

But there has been one aspect that some users have highlighted as a key pain point which Twitter has actually already accounted for. Well kind of.

A big issue some people have with the new Twitter.com layout is that the fonts are too big, and that it takes up too much room on the screen. But in a new blog post on the change, Twitter has outlined how users can change the font sizing, along with various other personalization choices which are built into the new format.

First, on fonts - if you want to change the size and/or color of your font on the new Twitter, click on the 'More' three dots tab at the left of screen, then select 'Display' near the bottom of the list. 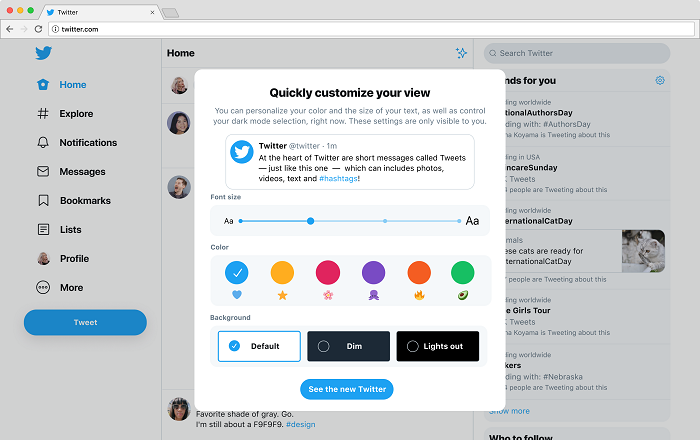 There are also new font color settings, which we noted in our original overview of the update, so you can switch your Twitter text to your preferred color template.

Unlike changing your profile theme color - which appears to have been removed as an option from Twitter.com as part of the update - changing your font color won't impact how others see your profile, it's purely an aesthetic change for your own usage benefit.

And right down the bottom of the top screenshot above, you'll also note that the new Twitter.com has not one by two dark modes available - 'dim' and 'lights out'.

So, now you have more ways to make Twitter look how you want on desktop. As noted, these options don't necessarily address all the concerns raised with the new layout, but they may better cater to your usage.

You can read more about Twitter's personalization changes in this post.